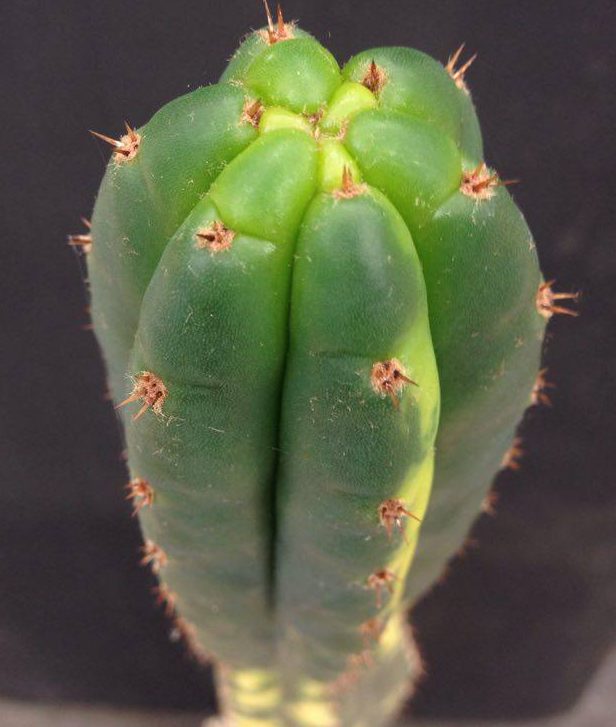 The Saquarema strain is a very rare Trichocereus pachanoi strain that was discovered in Brazil by a German botanist. The plant is named after the city where it was found. SAQUAREMA is a municipality located in the Brazilian state of Rio de Janeiro. It is extremely rare that you find a Trichocereus in Brazil and I am still astonished because this is definitely the first time I heard about a WILD San Pedro in Brazil.
Today, Trichocereus pachanoi can be found in all South American countries but those plants are usually planted out as crops, natural fences or just ornamental plants. Without knowing the situation on the locality, I personally think that it MIGHT have gotten there long time ago with someone who planted it out (maybe with someone who brought it there from Peru) and that this plant has escaped into nature and grew into a the gigantic plant that it is now. But that´s just speculation and without investigating this first hand, it is impossible to know how this rare plant actually ended up there. The botanist who found it is very skilled and trustworthy, so I have reason to believe that this plant was really a wild Pachanoi.

We still learn new things about the San Pedro group, which is also underlined by the fact that Torres & Torres found Tr. pachanoi in the Atacama desert in Chile. Besides, the species name Trichocereus macrogonus has a wild history with people (Schumann) suspecting that Tr. macrogonus might have actually been originally from Brazil. I don´t think the latter is the case because we know Trichocereus peruvianus (and Tr. macrogonus) from Peru and because there is reason to believe that Schumann confused Tr. macrogonus with a Pilosocereus, but it also shows that Brazil still has gray patches that at least deserve further investigation.
Nothing is impossible and I would love to hear more about the status of Trichocereus sp. in this area. Brazil is a wonderful place that still comes up with new cacti every now and then and this would not strike me by surprise. So yeah, I am puzzled by the find of this plant in Brazil, but there are many possibilities and maybe some of our Brazilian friends check the area out sometime soon.

Saquarema is located at the Costa del Sol and is a wonderful place with a wonderful flora and fauna. Unlike popular belief, the Saquarema clone is NOT a Pilosocereus. It falls totally in line with other collections of Trichocereus pachanoi and reminds me of the plants that we know from Chile. It has a bright green epidermis and short stump spines and is partially variegated what makes thing plant even more collectible. The original mother plant was 2 – 3 meters tall and had three strong branches that all were completely yellow.  The botanist managed to find some seeds at the bottom of the mother plant and raised a few seedlings which are now just called SAQUAREMA. One of those seedlings was partially variegated, which is known as the SAQUAREMA Variegate clone. There also are non-variegated plants, but due to the rare nature of this clone they are literally unavailable most of the times.
In very rare cases, the variegated clone is offered in some of the Trichocereus Facebook Groups…but those usually sell pretty fast.