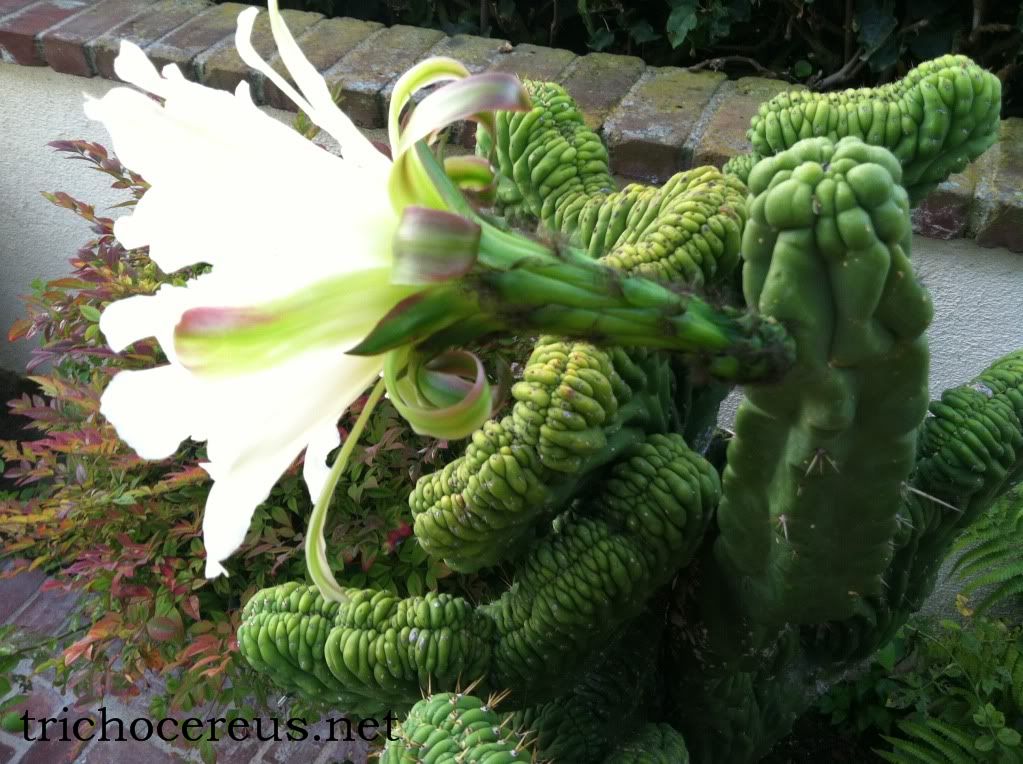 Nitrogen´s Trichocereus TPC, not to be confused with Nitrogen´s TPM, is a mutant version of a Trichocereus peruvianus or Trichocereus pachanoi that became known in the Trichocereus community after the US breeder Nitrogen has produced quite a few hybrids involving it. This resulted in a large number of mutant offspring that Nitrogen donated during his first and second SAB seed giveaway.

The seeds that he harvested from this plant were given away to friends and other growers and we hope to see more TPC (Trichocereus peruvianus cristata) offspring soon.

This plant was so mutated that even its flowers looked abnormal somehow. It´s very rare that mutated cacti are even able to produce flowers. And not only did this one flower, but also in the most spectacular way.

As you can see on the pics, the plant can grow crested and monstrose at the same time. In 2012, Nitrogen used a pollen mix of Tom Juuls Giant, SS02 and a SS02 hybrid with Trichocereus pachanoi to pollinate this plant.

Where to get a cutting of Nitrogen´s TPC?

There are many different types of TPC. It´s an abbreviation that simply  means “Trichocereus peruvianus cristata”. However, this particular TPC is very rare and can only be found in Nitrogen´s garden, and in the collection of US breeder Misplant.

Nitrogen distributed all seeds he got from his TPC among the community for free, which is why they should be traded actively among fellow growers . If you own one of them, please consider taking cuttings and making them available. Because that´s what the purpose behind Nitrogen´s 2012 giveaway was all about.