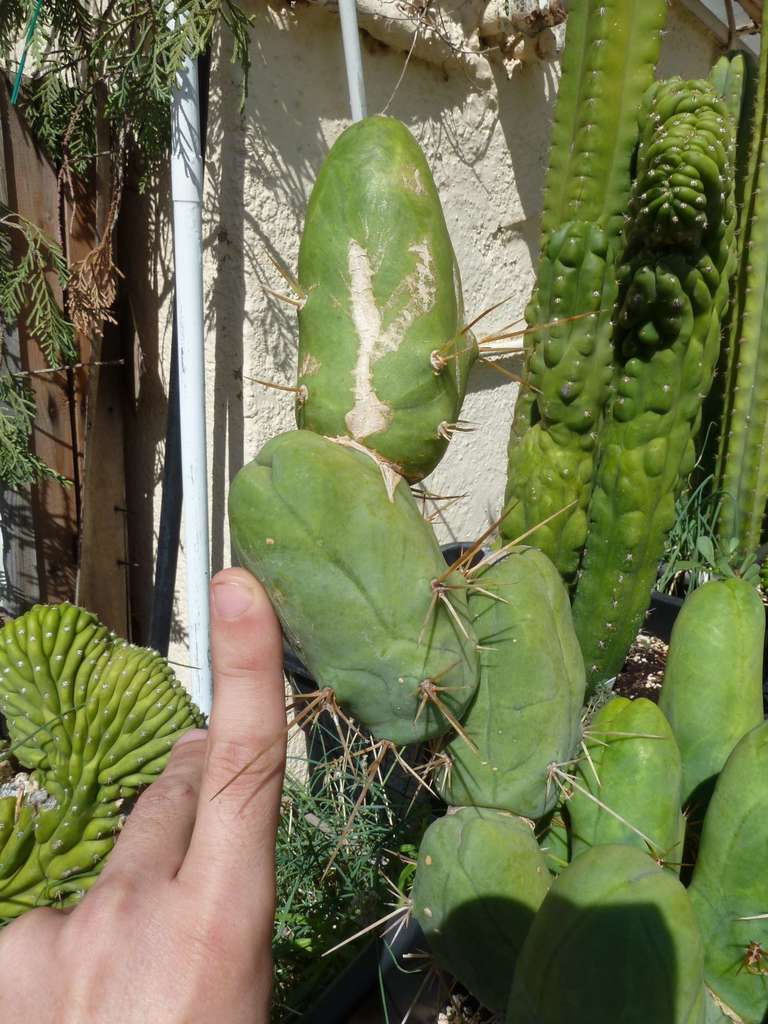 The so-called TBM (short for Trichocereus bridgesii monstrosa) is a Trichocereus clone that produces some very typical spineless growth that gave it its name “Penis Plant”.  It forms small & penis-like pups that look like green sausages (or a really small penis) that pup repeatedly over and over again. The fact that the new pups tend to have a small insertion in the middle reinforce this impression.

There are two clones that we know of this well know monstrose:

This version grows like a classic columnar cactus and grows upright columns. This version does not terminate its growth over and over again, and produces regular spines very sporadically. It is almost spineless and forms some blue/green stems with 2-4 flat ribs. In very rare cases, it produces yellow spines that demonstrate that this plant is actually a Trichocereus bridgesii, also known as Echinopsis lageniformis. This type is always mixed up with the smaller version of the penis cactus, Trichocereus bridgesii monstrosa clone B. The columnar version is  much more rare than the smaller TBM Clone B.

This clone has between 2 and 5 ribs and produces some strong spines that are very visible, even on small plants. The pups reach 3″ to 6″ before they terminate their growth and produce a new pup on top of it. This version  is also referred to as TBM Clone 2.

Curt Backeberg claimed to be the source for at least one of the two TBM in his book DIE CACTACEAE. I have no reason to doubt his explanation, as he had the infrastructure to make this plant one of the most common monstroses that it is today.

Where to buy a TBM Clone A or Clone B?

CLONE B is widely available and can be found in cactus collections all over the world. You often come across TBM that are for sale on marketplace sites or classified ads. In Australia, CLONE B is very common while CLONE A is extremely hard to find. There are a handful of growers who got their hands on a Clone A, but almost all plants on the Australian market are Clone B.