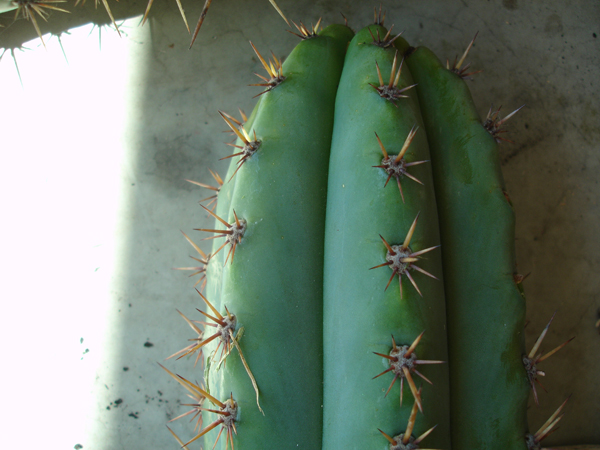 The Bogan clone has one of the funniest backgrounds of all the clones that are known in the community. It all goes back to the year 2006, when the SAB Member DuG discovered a very cool type of (back then, suspected Trichocereus macrogonus) growing in front of a house and named it Bogan. He initially asked for a cutting (which he was lucky enough to get) and next time he got there, he realized that the large motherplants had been hacked down by the “bogan” homeowners. And not only had they hacked them down, but they also tried to burn them. He immediately asked if he could take them with him and they were more than happy to get rid of them…because…you know, cacti don´t burn so well. Here is DuG´s original picture on SAB just to show you how they were looking back then.

Copyright DuG, have a look at the complete Thread on SAB here!

Well yeah, and the plant was passed down from DuG to many other SAB members, of which some of them still grow them today. Copyright Prier.

So far, I havent seen a flower pic but I will certainly update this page as soon as I get some. The plants usually have a very bright green epidermis and look very much like the Ecuadorian types. On the earlier pics, they looked a lot more like a peruvianus, but this clone shows it´s genetics on the young growth. But for a pachanoi, it can get very long spines and it definitely is a very cool plant!