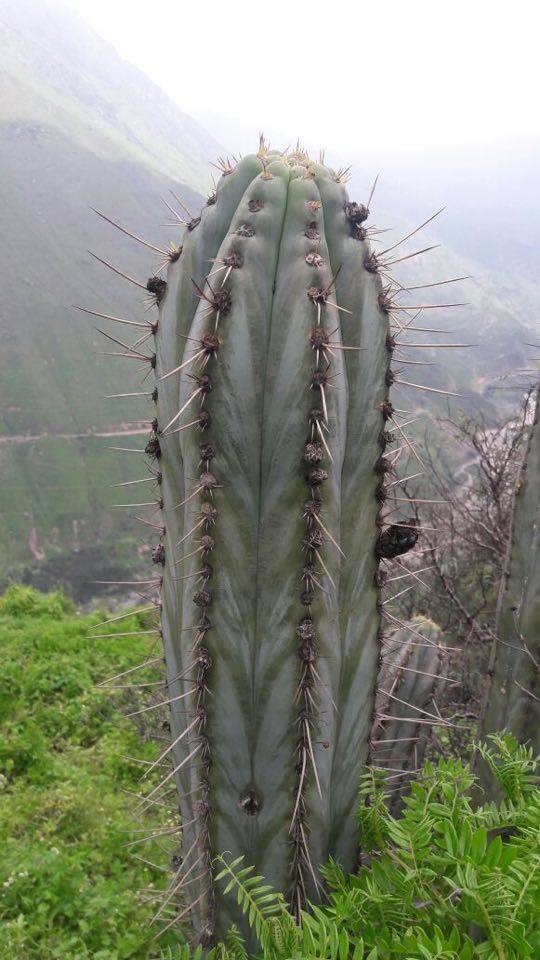 In this article we show some photos from Matucana, which is the type locality of Echinopsis peruviana. These plants are often referred to as Trichocereus macrogonus and people who identify these plants tend to identify them as Trichocereus macrogonus due to their spine color. I personally do not think it makes a lot of sense to differentiate between Echinopsis peruviana and Echinopsis macrogona as the whole complex is incredibly variable. Differences between a form from Matucana and one from another Peruvian city do not mean that something has to be a different species. The people who get to choose which differences draw clear lines between two related species are the authors who describe them, and so far I have not read a conclusive argumentation on clear boundaries between Echinopsis macrogona and Echinopsis peruviana and I think DNA testing is the one tool that should be used to decide this. However, since there is no country of origin, type locality or Herbarium piece of the original Cereus macrogonus, which makes it impossible to compare other populations against it. And this is pretty much the crux of the problem.

Below you can see some photos from Huariquina in Matucana. All plants there are very beautiful and among the most visually pleasing Trichocereus species we know. Icaro DNA and Los Gentiles look very much like this. The plants grow columnar, but with a clear tendency to lean over every now and then. They do not really grow prostrate, but they don´t always grow a 100% columnar either.

If you like the articles we write, check out some of our other ones:

For example, this page contains all the necessary info on Trichocereus macrogonus / Echinopsis macrogona. You can also read our database page about the species Echinopsis peruvianus here.

Pomolargo is another Peruvianus population that is a glowing example for the beauty of this species.

Collana Roja is another Matucana population that is typical for Echinopsis macrogona. The spines are brow, sometimes even red, and this is one of the only traits that are somewhat usable to differentiate between Echinopsis peruviana and Echinopsis macrogona. Again, most are mostly synonymous anyways, which is underlined through the fact that Echinopsis macrogona was never found again, from the time on that Britton and Rose wrote their description of Trichocereus peruvianus. That alone speaks volumes and the reason is that all the plants which were formerly identified as Cereus macrogonus were later attributed to Britton and Rose´s name. There are differences between the two descriptions, but they are rather small-

Collana Pichu is very similar in regards to the phenotype and gets very close to Collana Roja.

In Sucro we´ve seen some plants that were relatively short spined or even spineless. There´s quite a few regional forms of this species that is spineless, but these plants are usually very spiny as seedlings and only lose their spines later on. In particular, we´ve grown some seeds of Collana Roja, which are quite spiny as seedlings and we hope they will lose their spines later on.