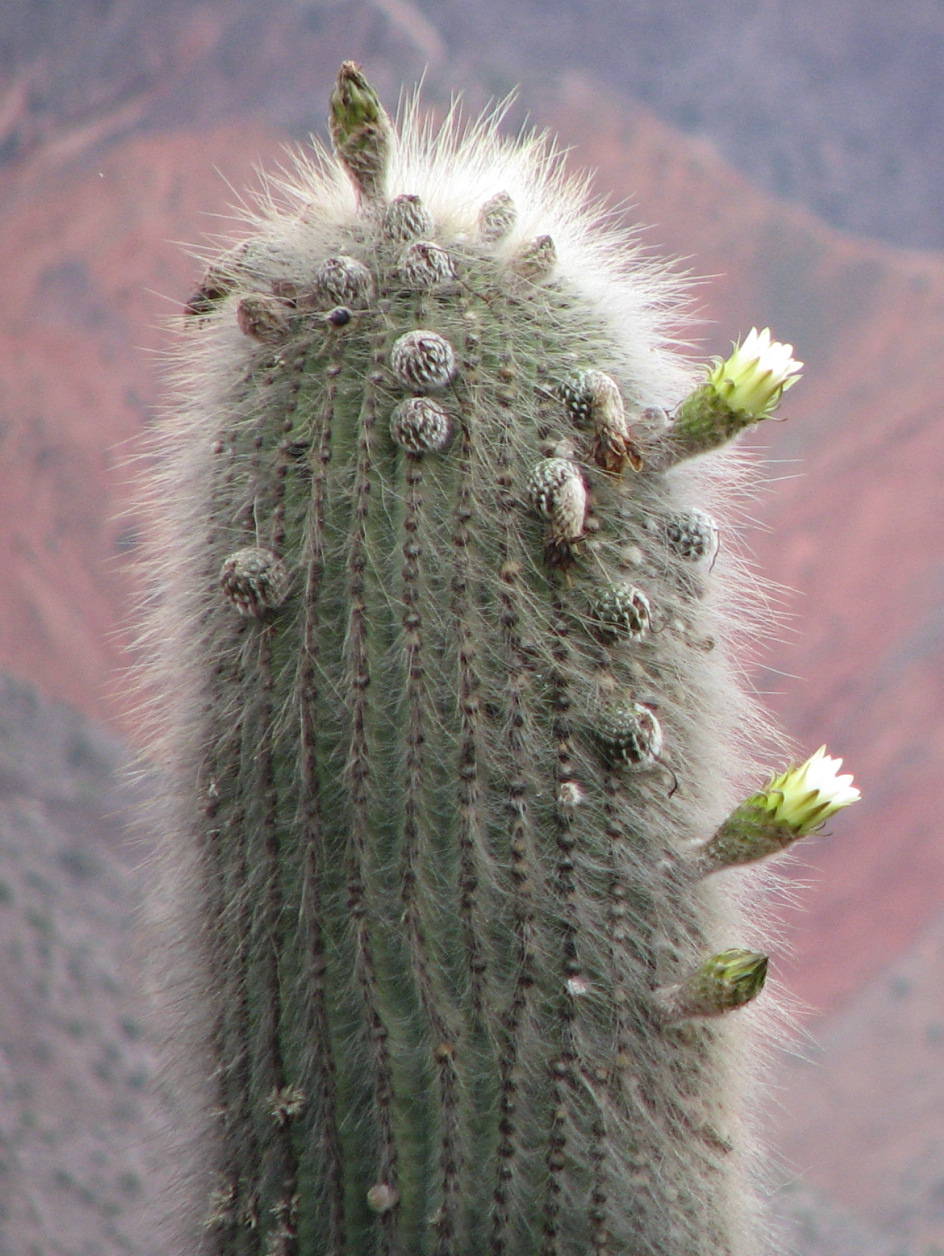 Trichocereus pascana, also known as Echinopsis atacamensis ssp.pasacana, is a columnar cactus that can be found growing throughout the Andes.

Trichocereus pasacana is a tree-like cactus that gets up to 10 meters tall though the average height is usually a lot less. It can reach a diameter of 30-45 centimeters and has between 18-22 ribs. It has a lot of small, needle-like spines that can get up to 10-15 centimeters in length. The mature form looks a lot different to its early appearance. The spines are yellow in color and their length is decreasing during the life cycle of the plant. Old plants tend to have lesser spines that young ones and the early spine form is a lot stronger that the adult form.

The flower is white. 10-15 centimeters long. The flower has hairs on most parts and covered with a dark brown wool.

Round, up to 3 centimeters large.

Argentina, Catamarca, Jujuy, Tucuman, Salta and some parts of Bolivia.

Close genetic proximity to other species

Trichocereus Pasacana is a slow growing Tricho that should not be watered too much. It likes a little water every now and then in summer, but only when it´s actively growing. They should not be watered when it´s cold or rainy. Trichocereus Pasacana makes an extremely beautiful gardne plant but can get really big, so it´s actually only probable to grow them in a greenhouse that is heated all year long or in countries where they can grow outside. They usually produce very large root balls and if you grow them in a pot, it will get really heavy very soon.

The most important factor that influences frost tolerance is the wetness of the soil. Trichocereus Pasacana can tolerate very low temperatures for short periods of time. -5° celsius should be the limit though because low temperatures can cause the plant to rot. The minimum average temperature is around 10° celsius/50° Fahrenheit. It may even be possible for them to survive short night frosts lower than -5° celsius but I would absolutely not recommend it because it can leave permanent damage that doesn´t immediately show. But again, the plants HAVE to be dry over winter, no matter what. Personally, I don’t grow those Trichos in Europe because they just tend to get so massive that its hard to carry the pot.

Trichocereus Pasacana is very easy from seed and requires the same treatment as Trichocereus Terscheckii. It helps to allow the seeds to cool down during the night to increase germination rates. But the minimum temperature required to germinate them is between 25° and 29° celsius. The seedlings don’t need that much water and can germinate with very little. The nutrients stored in the seed corn will allow the seedlings to grow a couple of months without fertilizer. But after then, you should fertilize them with a very weak fertilizer solution. VERY WEAK is the important word, or they might die because of fertilizer burns, which looks similar to sunburn.

Most seeds on the market have a crappy quality and there are very little professionals who sell this type of seed. The fact that those plants have to reach a very large size before they flower leads to very little growers giving away some seeds. But every now and then, private growers in our Trichocereus Group give away some seed. Apart from that, you can get live cuttings on various places, including Ebay, Amazon and online nurseries. Often times, cuttings sold as Trichocereus Pasacana are actually Trichocereus Terscheckii, which is caused by their similarity at a young age. There are very little differences you can keep them apart.

This is an adult type that rarely branches, Pic: Prier

This is a very typical, juvenile form! Pic: Prier

Nice pic of an adult form, including flowers and fruits. Pic: Mourial

Trichocereus Pasacana is also used as fencing. Or, as Doors. Pic: Mourial

Pic: Thanks to Prier for these amazing pics!