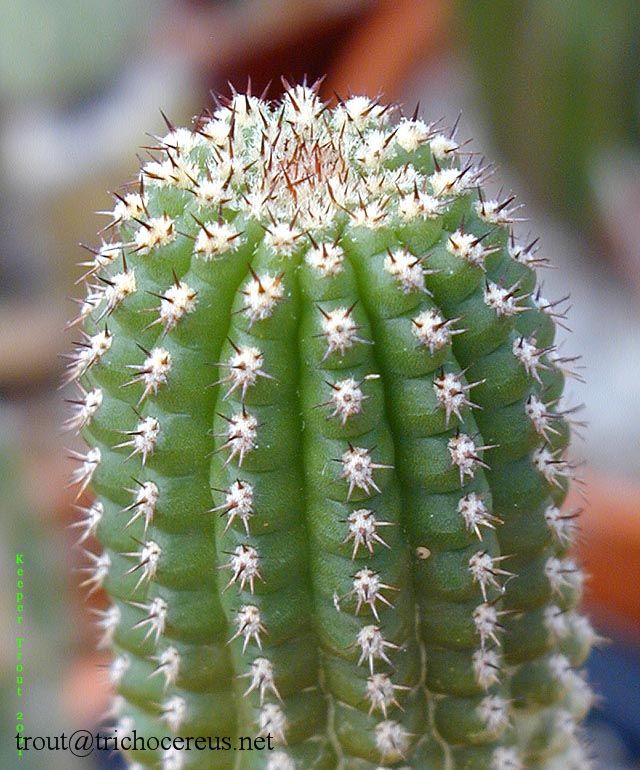 Alright, it´s obvious that Trichocereus harrissima is not an accepted species. The name probably came from a seed or plant seller who sold this plant at some point in the past. I list it as a nomen nudum here, which means that it is a bad name that it is a “nude name” that lacks a formal description. This plant is actually Trichocereus purpureopilosus, which was described under that name and is extensively used in hybrid culture.

Trichocereus purpureopilosus is an amazing cactus with a beautiful appearance and flowers. The flowers are white in color and you can find out more about it here on the page: I wrote a whole lot more about this species on the page about it.

I am currently not sure where the name Trichocereus Harrissima came from but I know for a fact that it originated after it was sold under that name. The name could be a reference to the genus Harissia, but it is very different to most plants from that genus.

These photos were provided by K. Trout / Troutsnotes.com. 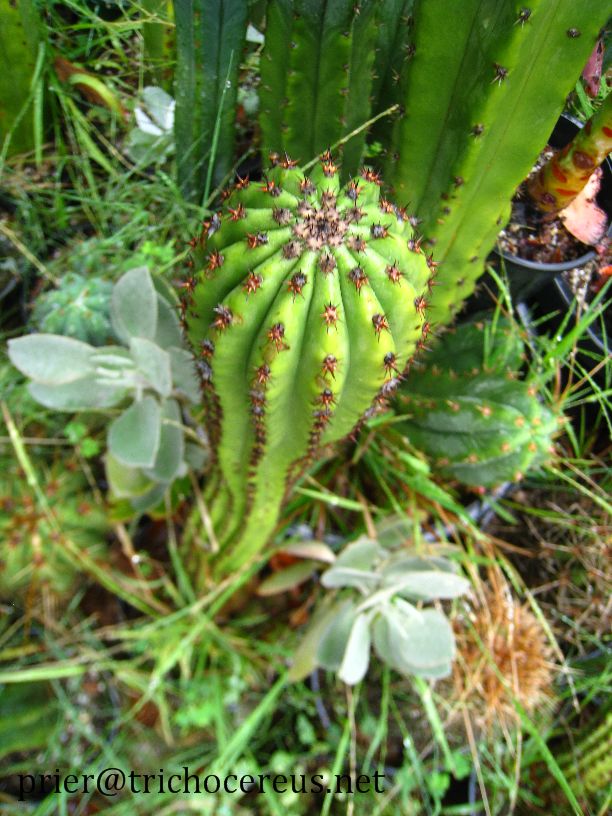 The plant on this pictures is what was known as Trichocereus purpureopilosus. It is a very attractive plant and was used extensively in hybrid culture. The flower is purple and looks amazing. The modern taxonomy placed this plant in the messed up species Trichocereus lamprochlorus and though I dont really agree with it being synonymous with lamprochlorus, I will definitely add this piece of information on this page.

This type of Trichocereus is pupping from the base and can grow upwards or laying sideways/creeping. It can reach a size of up to 60 centimeters and has a maximum diameter of 7 centimeters. The color of the epidermis is a very dark, wet green and has a shiny texture. It can reach up to 12 ribs and has 18-22 very thin radial spines that are up to 8 mm long. Besides, it has up to 5 middle spines that are yellow in color and have a slightly swollen base.

Please note that those plants are extremely common on the commercial market, especially among hybrid breeders. And every hybrid can be different.

(It is obvious that it involves Trichocereus purpureopilosus though. Either as a father, or a mother, which was already indicated by the earlier version of this article. I am editing it again because someone must´ve overlooked when I wrote that “I CONSIDER THEM TO BE A TRICHOCEREUS THELEGONUS x PURPUREOPILOSUS HYBRID”, so I need to underline that again. )

You can see the typical Thelegonus-like edging, but without it´s typical spines. I will also include this plant on the page about Trichocereus thelegonus because it seems to be very closely related to it. The flower is also very typical to Thelegonus and it´s probably a thelegonus hybrid. However, there are many Purpureopilosus hybrids that have a much more distinct thelegonus-like edging than the one in the first two Purpureopilosus pics on this page and I will add some more to show how variable that whole group is. That variability is probably caused by hybrid culture though:

Categories: Trichocereus Species, Trichocereus Species Q - Z
Tags: Echinopsis, Echinopsis Purpureopilosa, Trichocereus brevispinulosus
Join my newsletter to get my free eBook TRICHOCEREUS CULTIVATION and a 20% discount!
Shop
Recent Posts
This website uses cookies to improve your experience. We'll assume you're ok with this, but you can opt-out if you wish. Cookie settingsACCEPT
Privacy & Cookies Policy