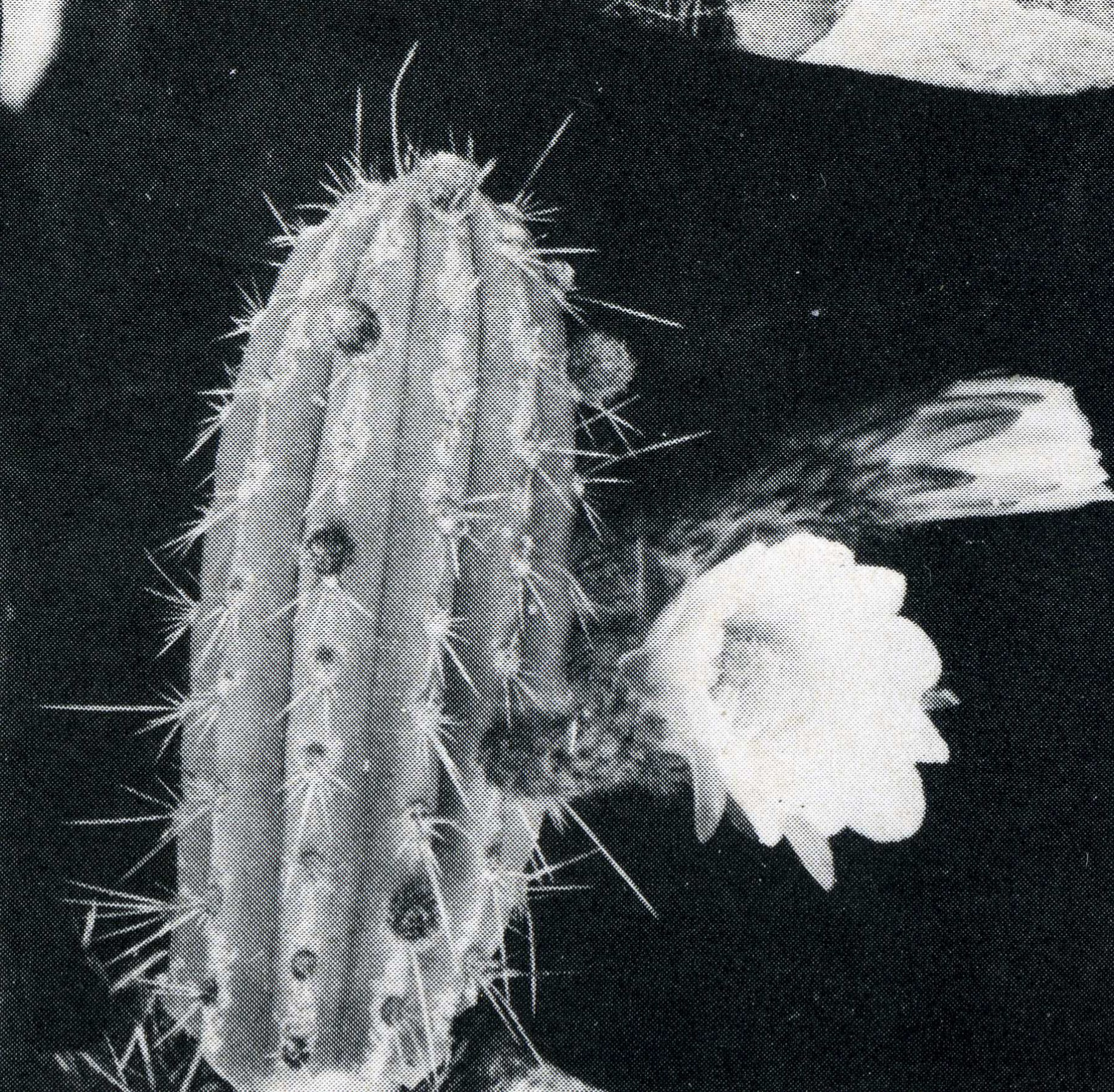 Depending on who you ask, there is a constant debate about whether or not this species is a “good name”. Anderson included it in his Cactus Lexicon as Echinopsis peruvianus ssp. puquiensis. Personally, I think that this plant is closer to Trichocereus pachanoi than it is to Trichocereus peruvianus. On the other hand, I also think that Tr. pachanoi and Tr. peruvianus are probably a very large and variable species with many intermediates between the two and I would not mind to throw Tr. puquiensis in there as well. The rib structure and areole shape of Tr. puquiensis is similar to the one on Tr. pachanoi. The big difference is that Tr. puquiensis has 8 – 11 ribs and a strong groove above the aroles. Please note that there are many different types from the Puquio region, what is the cause for the large number of different plants that go by this name.

Trichocereus Puquiensis gets up to 4 meters tall, but most plants are around 2 meters. It pups from the base and grows as columnar shoots, growing upwards. Tr. puquiensis has no cuzcoensis-ribs but a very similar spination. Think of it as a 8 – 11 ribbed Pachanoi with long cuzco spines that lack the typical cuzcoensis swollen spine bases. This is another giveaway that helps you to ID it.
The color of the epidermis is blue/green. It reaches a maximum diameter of 10-20 centimeters with ribs that are between 1-2 centimeters high, the areoles are 1-2 centimeter in diameter and felted, similar to the areoles on Trichocereus cuzcoensis.
Trichocereus puquiensis has 10-12 radial spines that are up to 2,5 centimeters long. The new spine growth of the radial spines is brown. It also has 1-2 long middle spines, of which one or two are pointing upwards. Those middle spines are 8-12 centimeters long. New spine growth is brown and old spine growth is gray, very similar to the one on Tr. cuzcoensis. You see it´s not a typical Pachanoi but a intermediate that involves traits of various species. Please note that there are some plants in the Puquio habitat that are in fact cuzcoensis related, and the Trichocereus puquiensis from Karel Knize is actually one of them.

Flowers: The flowers are 15-22 centimeters large and white. A typical San Pedro flower. The tube is up to 2.5 centimeters thick and hairy.

Habitat: Puquio, Department Ayacucho and it only occurs there. It grows in neighborhood of Erdisia Quadringularis. Rauh assigned the collection number K119.

This is Rauh´s original, latin description, which slightly differs from mine.

Friedrich Ritter sold Seed labeled as FR 155b. Ritter said that the Species would rather resemble Trichocereus pachanoi than Trichocereus cuzcoensis and I tend to agree. The species is limited to the pacific part of the Andes, while Tr. Cuzcoensis grows on the Atlantic Part. After years of investigating I finally think that Ritter was probably right, what means that Tr. puquiensis is more on the Pachanoi end of the spectrum. He knew the South American cacti better than everyone else, but during that time, many regional varieties were described as species and most of them did not age well and ended up being merged into Tr. peruvianus or Tr. pachanoi. I thought about this species a lot, and I guess there are plants that have traits of more than one species.

Karel Knize sold seeds & plants under that name too. Knize´s Trichocereus puquiensis is extremely close to Trichocereus cuzcoensis, but has a couple more ribs than a standard cuzcoensis.  Apart from that, the ribs are clearly Pachanoi ribs. I´ve seen plants with five ribs and some with ten.

Every time you come across a plant with more ribs than usual, Trichocereus puquiensis should be a considered option. It also does not have rounded spine basis, what clearly differentiates it from Trichocereus cuzcoensis. Knize´s version is becoming more and more common because Karel Knize sold large amounts of seed and plants in the past years.

There is very few information about frost tolerance of Trichocereus puquiensis available. It should be grown like a standard Trichocereus pachanoi or peruvianus, because it´s general growth type is similar to that. It can tolerate frost but temperatures should not be lower than -5° to -10° celsius. Plants should be kept totally dry over winter.

You can buy seeds of Trichocereus puquiensis in my shop.

In the USA, I know of one supplier that grows the genuine Tr. puquiensis from Rauh & Backeberg´s description. Cactusaffinity.com! In Australia you can get live cuttings from the SAB shop.

This Pic is from Backeberg´s description:

How to support us?