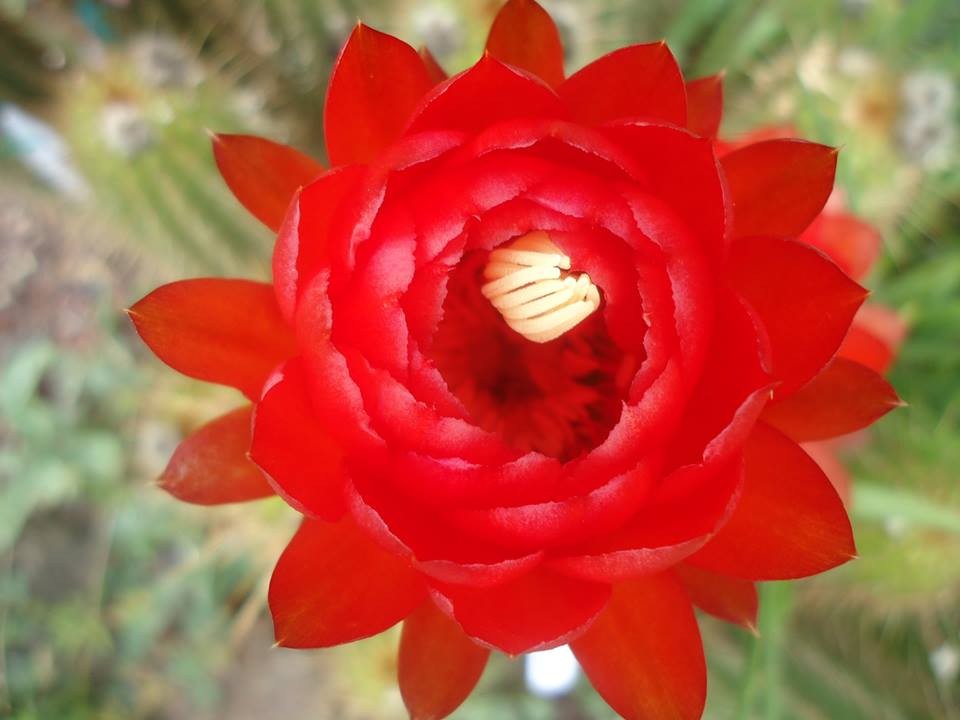 Trichocereus huascha has had a long history with many name changes due to its unique position between Trichocereus, Lobivia and Echinopsis. Friedrich & Rowley renamed it to Echinopsis huascha in 1974 but their actions weren´t really embraced with love.

I have some fresh seeds of Echinopsis huascha. You can get them here:

The list of names that Trichocereus huascha already had does not fit on one page, so I will only keep the most important ones. Many varieties of this species were actually labeled Lobivia, Cereus or even Chamaecereus and it´s very difficult to differentiate the plant from similar plants like Trichocereus schickendantzii, Trichocereus spachianus or Trichocereus grandiflorus.

Echinopsis huascha usually grows in small, clumping groups that reach up to 1,1 meters in height. It usually pups abundantly and can grow upwards like a columnar cactus or creeping. The pups can get up to 5-6 centimeters in diameter and has up to 15 ribs as a mature plant. The areoles are between 1 cm and 1,5 centimeters apart from each other. There are yellow colored and needle-like spines on each areole. Trichocereus huascha has 10-12 radial spines that are up to 2 centimeters long. The flower color is absolutely variable; also because there are SO many natural and commercial hybrids. This plant is used extensively in Trichocereus hybrid culture and many hybrids that are floating around on the market cant fully be id´d because the offspring can sometimes look very different from the parental generation. The plant flowers from the apex, through the areoles and the flower color can be yellow, red or orange. You can keep it apart from plants like Trichocereus schickendantzii by the color of the flower (Schickendantzii has white flowers) and the thinner growth of E. huascha. The flowers are 6-8 centimeters in diameter and the species is usually dayflowering! They also are sometimes self-sterile, while other forms are self-fertile. You usually need two plants to get seed, but T.huascha hybridizes so easily in nature that there are some plants that form fruit without being pollinated! There are constant arguments about its synonymy with Trichocereus andalgalensis and at the moment, I consider them synonymous. Trichocereus andalgalensis was described as a red flowering variety of T. huascha (T. huascha v.rubriflorus), but since there are also yellow flowering T. andalgalensis at the original site, this is not really a species that I consider correct.

Argentina. Very widely distributed and can be found almost everywhere around Catamarca & La Rioja. The plant grows at 900-2000 meters altitude.

By izzyplante from Montreal, Canada

This plant looks more like a Trichocereus candicans, but I am still keeping it here for now because it´s from a botanical garden and it migt actually be a hybrid between these two species. Photo by Cliff from Arlington, Virginia, USA Echinopsis huascha