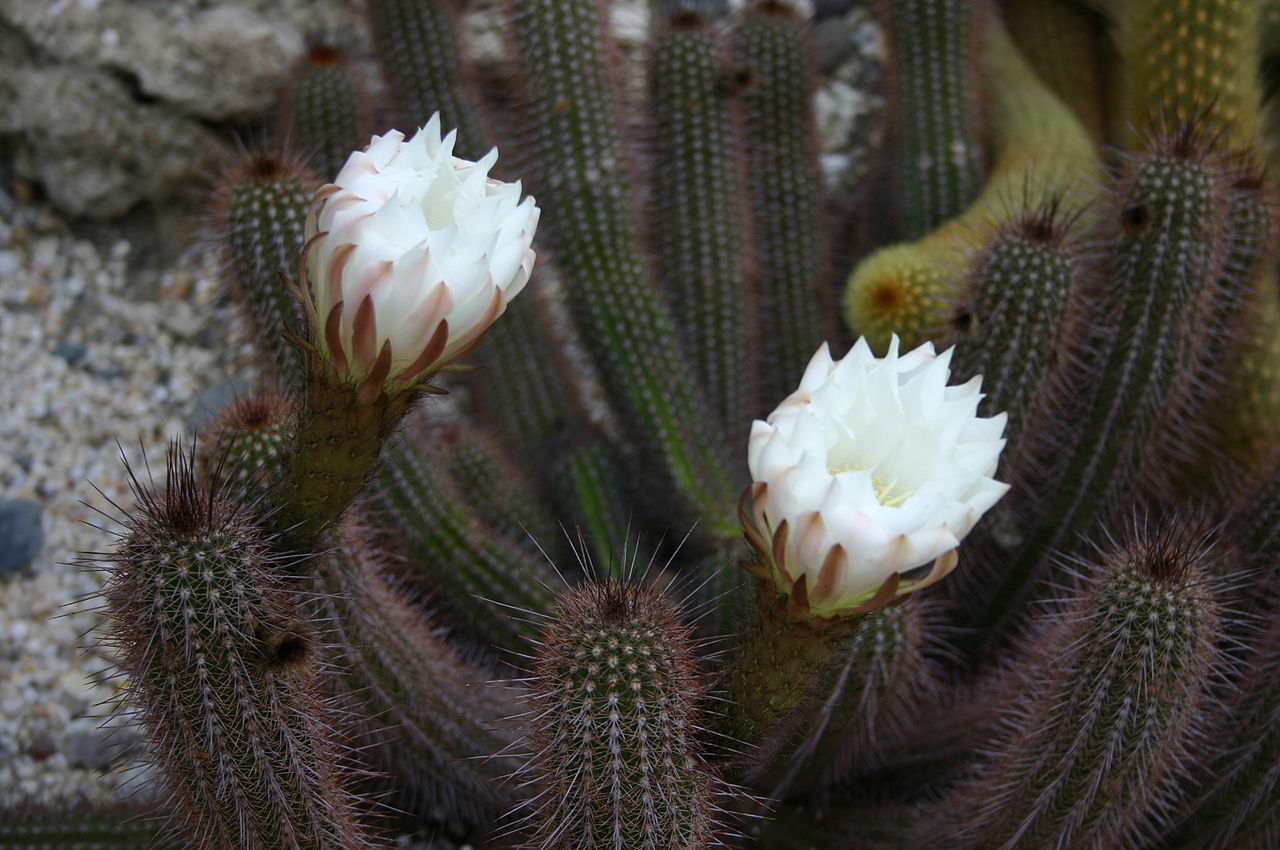 Flower: Up to 20 centimeters large, white. Trichocereus strigosus is a night flowering species. It also is self-sterile, what means that you need pollen from another donor to produce seeds. Please not that there is a white form of Trichocereus strigosus. The white flowering variety of this plant grows at around 1600 meters altitude. The plant is pupping from the base and only reaches around 60-65 centimeters in height.

Ribs: Trichocereus strigosus has 15-20 ribs and the shoots have a maximum diameter of 5-8 centimeters.

The areoles are white/beige felted and reach a maximum diameter of 5 mm. Every areole are approximately 3-6 mm apart from each other.

Spines: Yellow, very thin and fine spines, up to 3 centimeters long, 10-15 radial spines and 2-5 middle spines that can get up to 5,5 centimeters long. The plant has very long and fierce spines.

In addition, there are some other forms/varieties. One of them was originally known as Trichocereus strigosus var. flaviflorus and only occurs in Famatina, Province La Rioja in Argentina. This type has a yellow flower and is day flowering. The flowers are between 12-14 centimeters large. The yellow flowering variety grows a couple hundred meters below the white flowering one. In addition, the yellow flower is shorter.

Cultivation: The species is very rare in cultivation, though it sometimes shows up in cactus collections all around the world. The plant should be kept relatively dry, though it can be watered in the summer when it´s pretty hot. As it grows in the neighborhood of Trichocereus candicans, it requires similar conditions. Trichocereus strigosus likes getting a fair amount of sun light but shouldn´t be baked in full sun all day long. They usually grow in semi-shade and can form amazing clusters.

Winter protection and frost tolerance: Trichocereus strigosus is able to take a light amount of frost but everything lower than -5° Celsius is dangerous and can lead to permanent damage or death. Plants need to be kept completely dry if the temperatures drop below 10° Celsius/50° Fahrenheit and it´s best to keep them in a bright, well ventilated area. The minimum average temperature is 10° Celsius.

Seed germination: The seed germinates very easy, if it´s actually fresh. Especially with those rarer Trichos, there are problems regarding the viability of the seeds. I think Succeed has them in stock too and if possible, ask the seller in advance if he knows how old the seed is. That´s a good rule of thumb anyway and these days, I do it for all my seed orders.