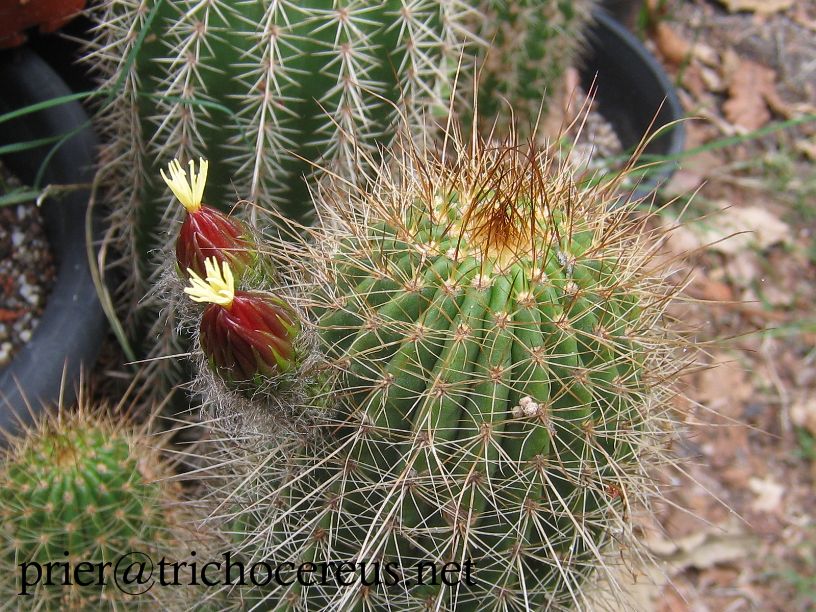 Trichocereus grandiflorus was moved around between the genera  a lot in the past. It is genetically close to both Lobivia and Soehrensia, which is why it was sometimes included there. Friedrich et al. listed it as Echinopsis grandiflora. Anderson then listed it as a synonym to Echinopsis calochlora in his CACTUS LEXICON. Joel Lodé lists it as Trichocereus rowleyi. Schlumpberger lists it as Soehrensia grandiflora (Schlumpberger).

The flowers of Trichocereus grandiflorus are often red and/or show various variations of red flowers. There are many hybrids, which is why the flower color is relatively unrelaible. There also are versions of flowers that are white in color and between 15-25 Centimeters in size. The tube is usually very hairy, but there are countless hybrids with all kinds of flower colors available on the open market.

Argentina, especially around Catamarca. The original description refers to a plant from a private collection and it is suspected that Trichocereus grandiflorus is extremely close to Trichocereus huascha and might even be part of this species.

The original description as Lobivia grandiflora came from Britton & Rose. Because of that, the plant was labeled as a Lobivia in most classic cactus literature. In addition, the title “Grandiflorus”, which roughly means “Large Flower” makes a lot of sense because most Lobivias usually have smaller flowers. The large flower size for a Lobivia shows that it is not a very normal Lobivia either. The collector Fric, who labeled it Chamaecereus giganteus (same principle because most Chamaecereus are tiny Lobivia), originally introduced the plant into the market, but since it was so different from Chamaecereus, this did not last long. Backeberg wanted to put it in his own problematic Genus Helianthocereus due to the diurnal flowers, but this flawed system was not adapted. Eventually, the plant ended up in Trichocereus, where it was until the restructuring made by Friedrich et al.

Trichocereus grandiflorus is a very hardy plant that can grow a lot during just one growing season if watered accordingly. The plant is able to tolerate some light frost but I would not recommend trying it out to the limit. I keep them at around 10° Celsius during the wintertime in a bright and well-ventilated room. I do not water them during the wintertime and only start watering again in March.

This plant is available every now on then on marketplace sites like Ebay or Amazon. In addition, many growers use it to produce hybrids. The Californian nursery Sacred Succulents has some colored Grandiflora hybrids and they sell seed every now an then. You can also try to make a post at our Trichocereus group at https://facebook.com/groups/trichocereus   because there are some growers there who give some away every now and then.

Before we get to the pics, let me first take the time to say thank you to Prier, who donated those amazing pics. Thanks Prier!

If you enjoyed this article, show us some love on Facebook, Instagram or join our Trichocereus newsletter.