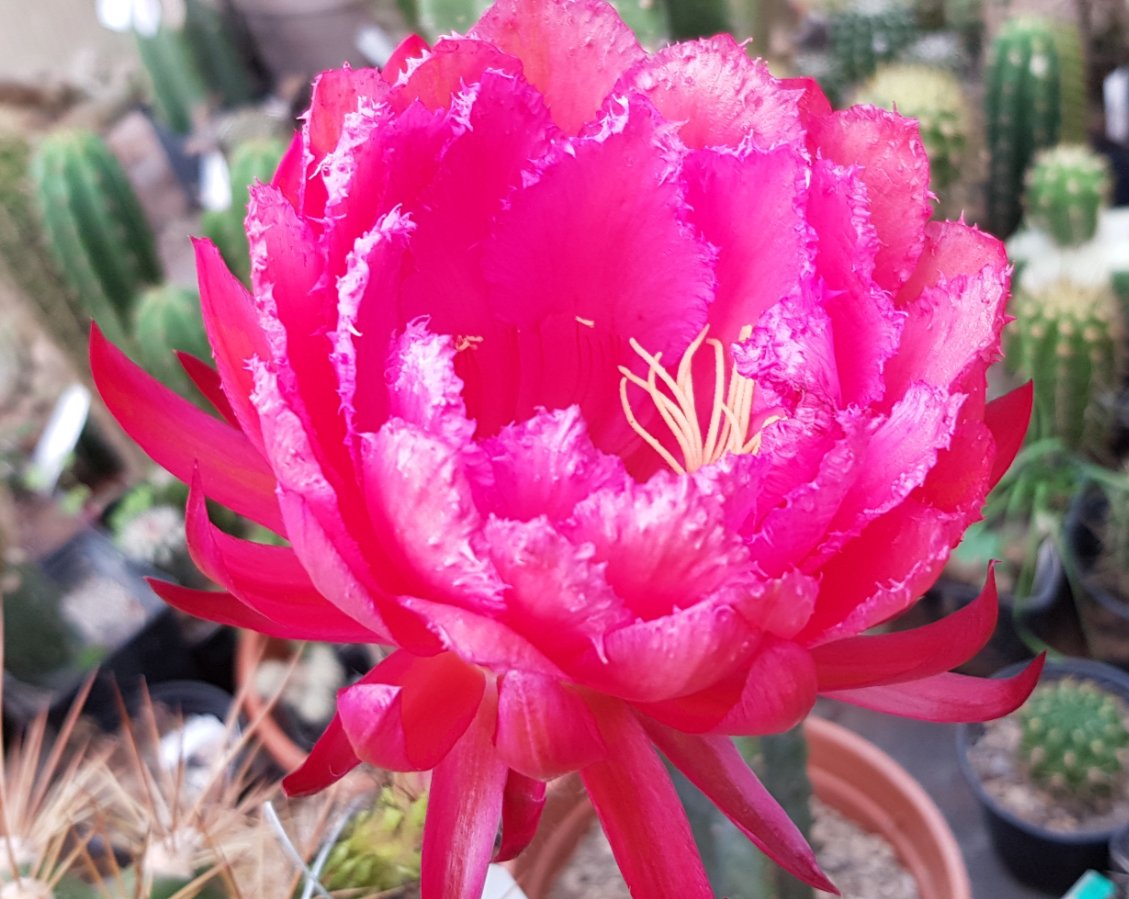 So this one is a very old Gräser hybrid called APOROCANDICANS SCHIGRA F2. I think the breeder is Gräser himself, but I am far from certain. The parents are an Aporocandicans hybrid (Aporocactus flagelliformis x Trichocereus candicans) x Schigra (Schickendantzii x Echinopsis eyriesii v. grandiflora) and this is an F2 hybrid from that cross. The flowers are beautifully ruffled and have a similar color to other Gäser hybrids like GRÄSERS SCHÖNSTE or GRÄSERS ERFOLG. The flowers open a bit reluctantly, which is what I haven’t really gotten perfect photos of it yet. Hope to change that in the next season. 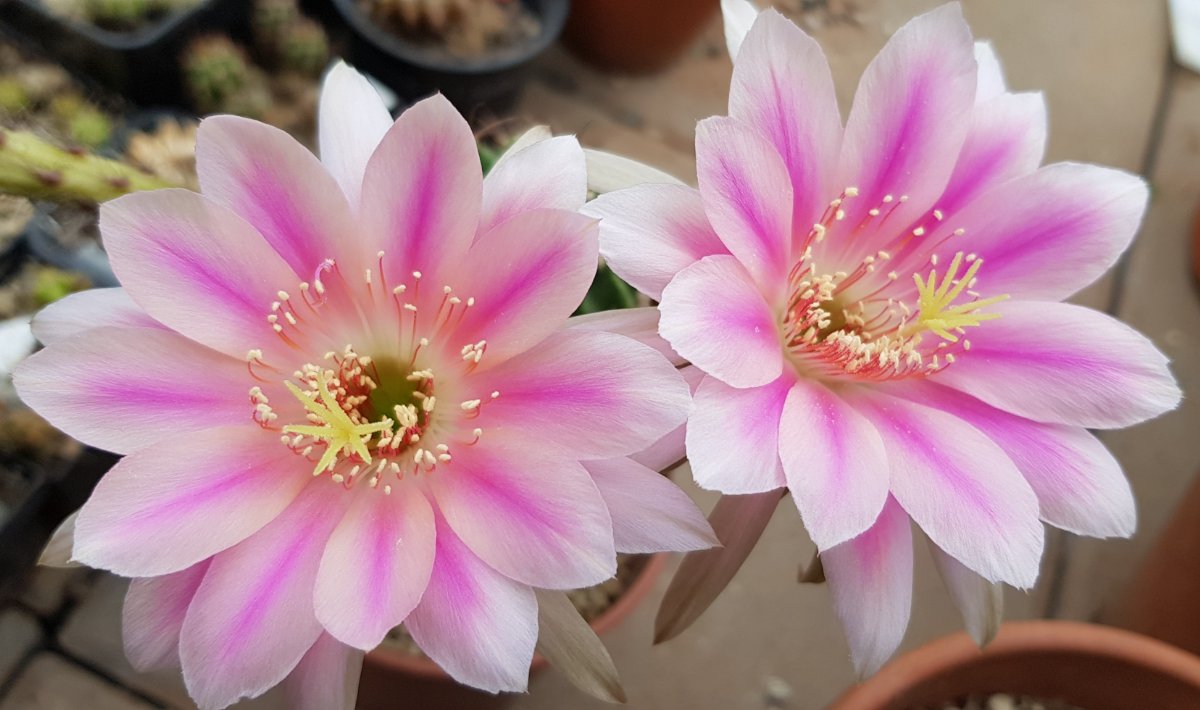 This one is a fantastic Pseudolobivia (now treated as Echinopsis) hybrid by Andreas Wessner called 18a/2000. The flowers have these nice pink stripes in center of the petals. Very nice and also a great parent in hybrid crosses.

Since Andreas Wessner does often not publish the parents of his crosses, I do not know which parents are involved here. Very clearly, one of them must be an Echinopsis obrepanda like hybrid and that one came very strongly in the body. It’s a classic Pseudolobivia like body (now included in Echinopsis and this one would probably count as Echinopsis obrepanda hybrid, simply based on the body). I also have offspring of it that ended up being world class, so this is a really good hybrid.

Photos of 18a/2000 Pseudolobivia / Echinopsis

Video of AW 18a/2000 Pseudolobivia / Echinopsis 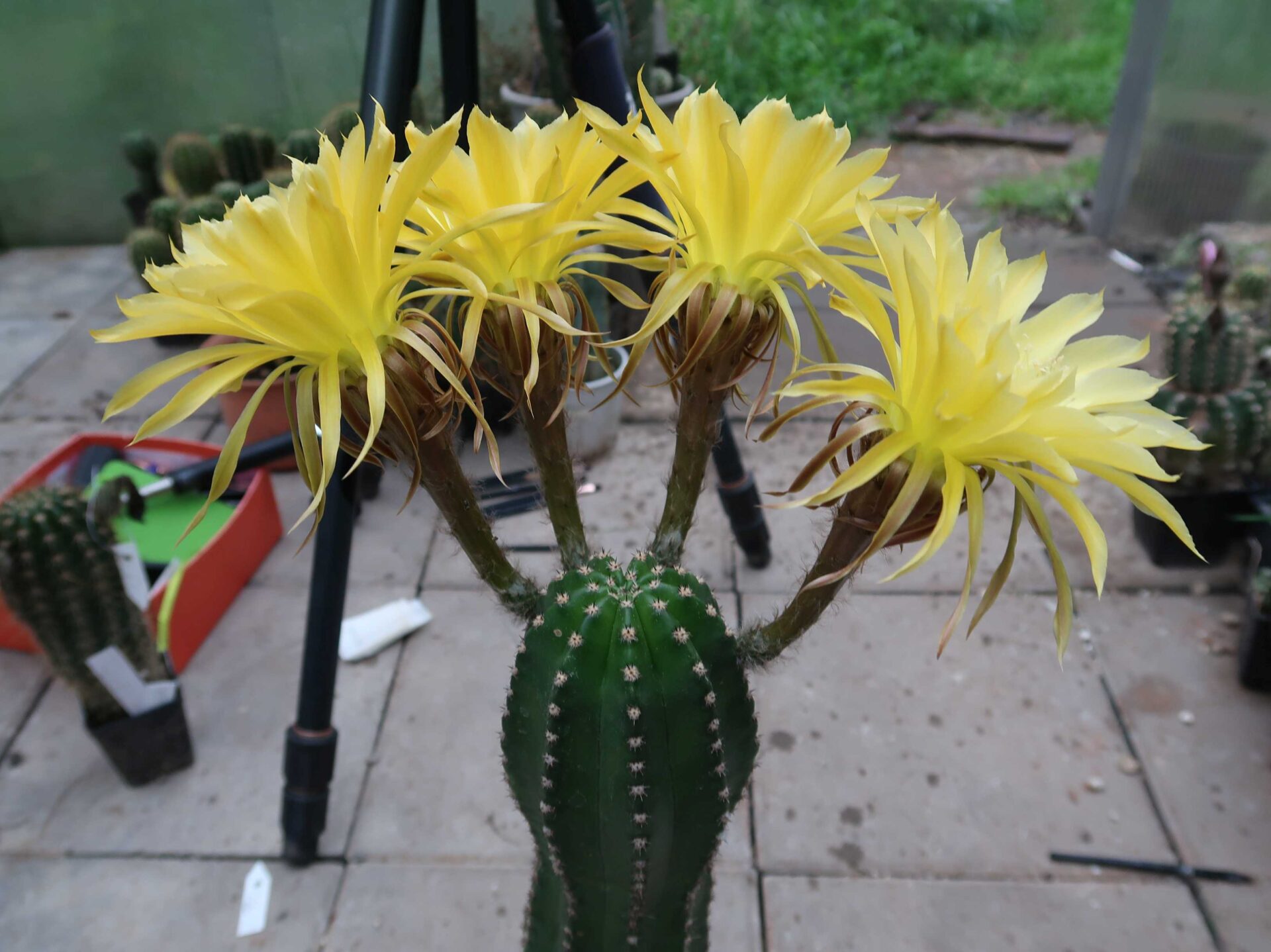 So this Echinopsis hybrid is a total classic. The breeder is Axel Neumann, and the parents are PAPAGENO x Frühlingssonne. The complete cross number is AN.2006.32.MXL.1. The flowers are very unusual and have a diameter of roughly 12 cm, yellow. In the video I mentioned that the mother is PAPAGENA, but it´s obviously PAPAGENO. 😉 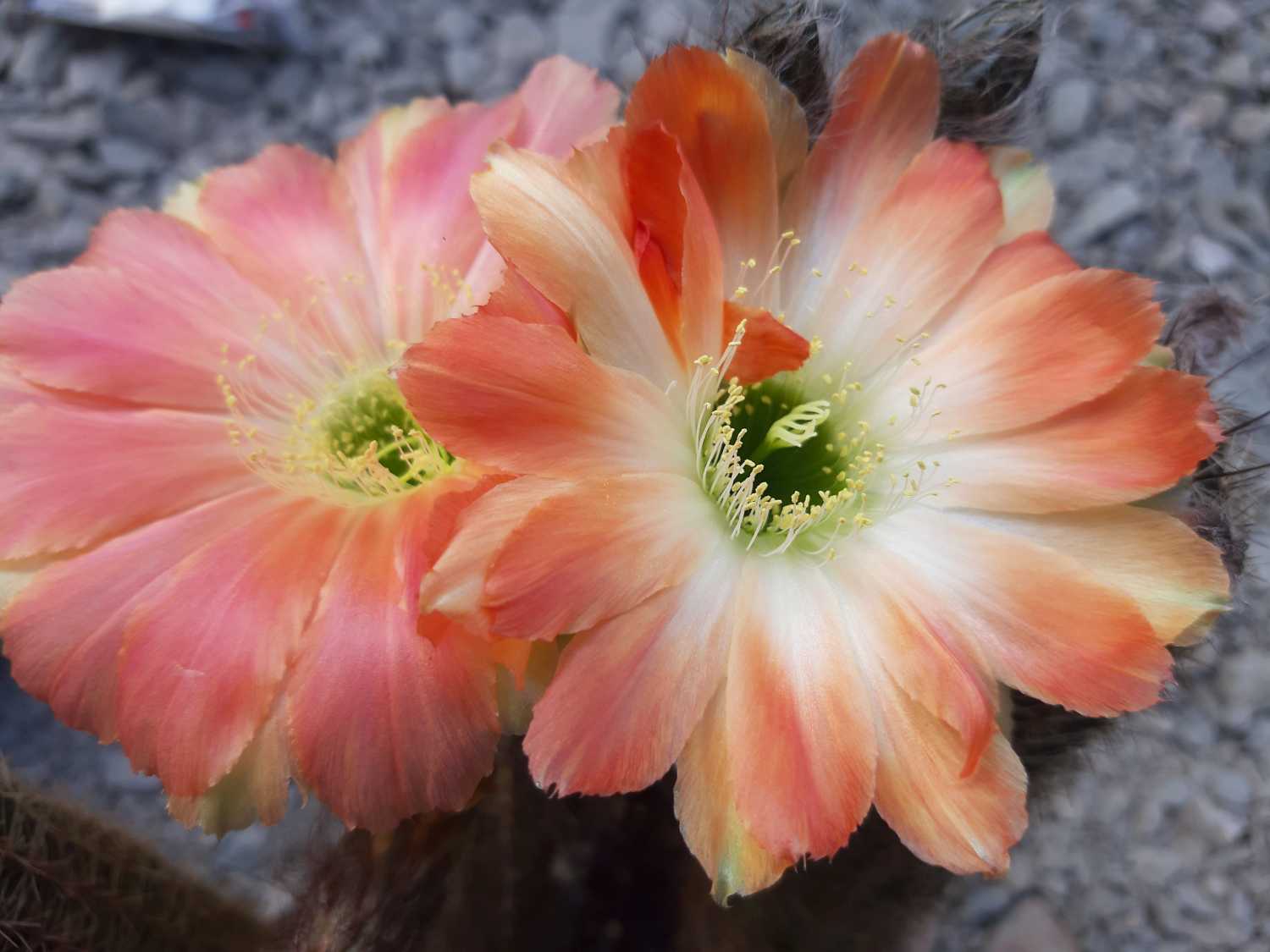 Here´s another video from my 2020, while I was really sick and trying to get myself together to pollinate all the flowers that opened up simultaneously. It was just too much to do for one person, and I was feeling terrible too. The good thing is I still pulled through and filmed some really nice stuff. This one here is a Lobivia densispina hybrid.

Some of the sisters of this hybrid 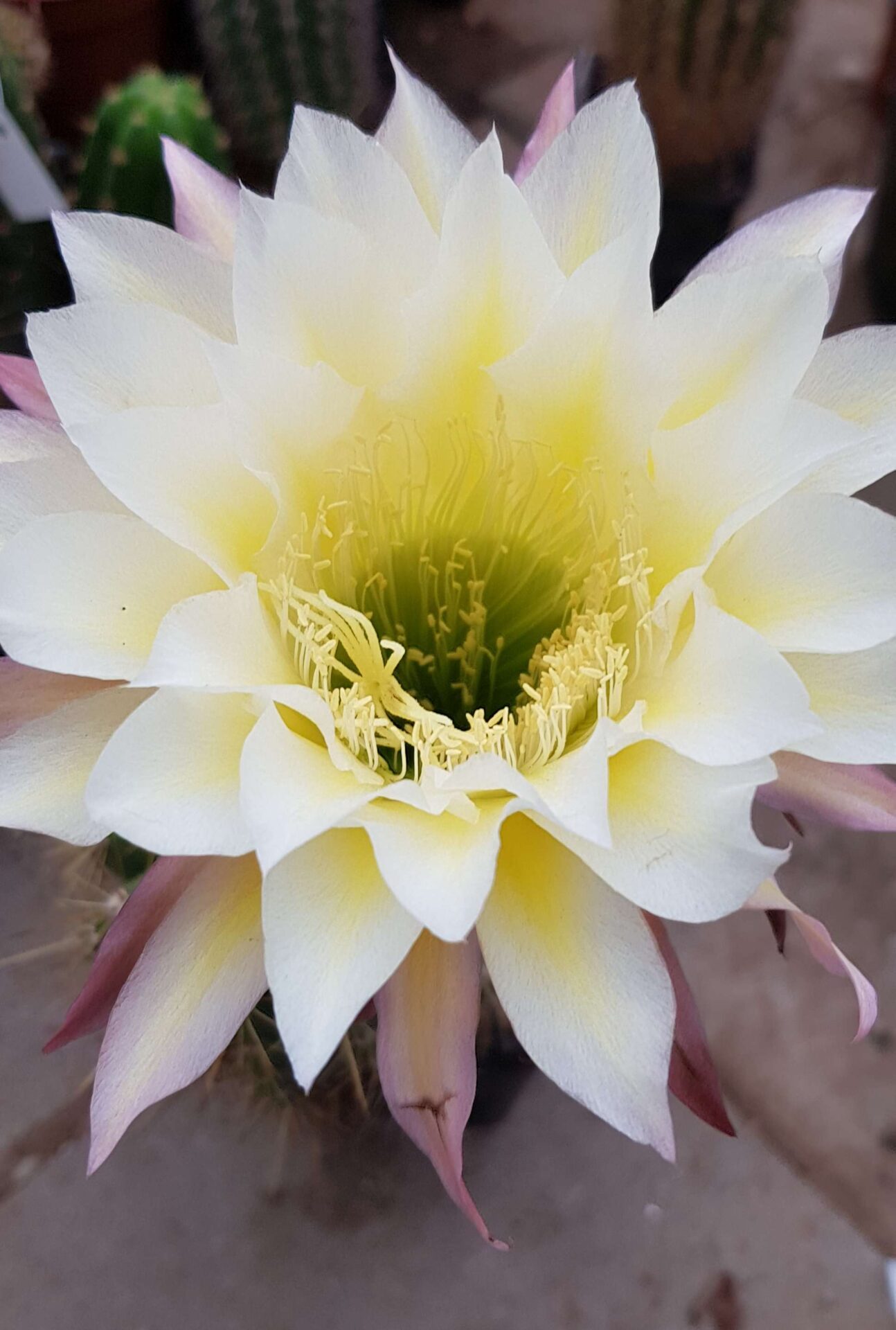 This one is a fabulous intergeneric multihybrid involving THREE different genera. And the flower is great too, with the yellow throat and the white petals. KA.2010.255.5 (Goldrose x Duett) x Dagati.

Hybrids with such a yellow throat are really sought after and I was really happy to get it from the breeder Uwe Kahle. It’s one of his hybrids between Echinopsis hybrid (GOLDROSE x Lobivia multihybrid DUETT) x Dagati. 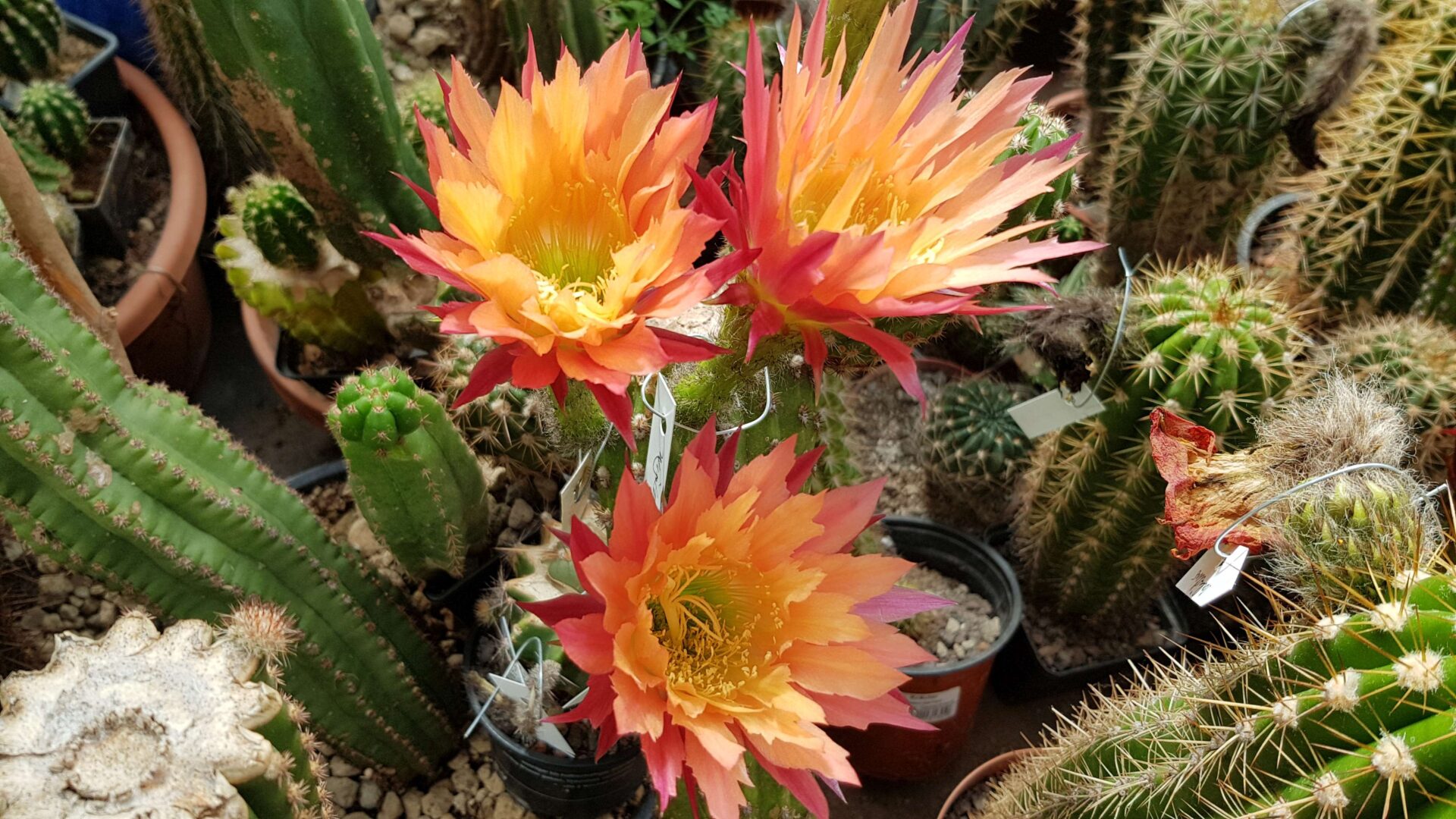 So this one is an oldschool classic hybrid by Anton Maas called SUPER APRICOT. Known and famous for the ragged flowers and the glowing nice flower color. It´s from a cross between an Echinopsis hybrid called APRICOT and Gräsers SUPER GELB Genetically, a total mess, but with the right parents it can still produce some decent offspring. Very often, the offspring doesn´t carry the ragged flower mutation, but sometimes it does. 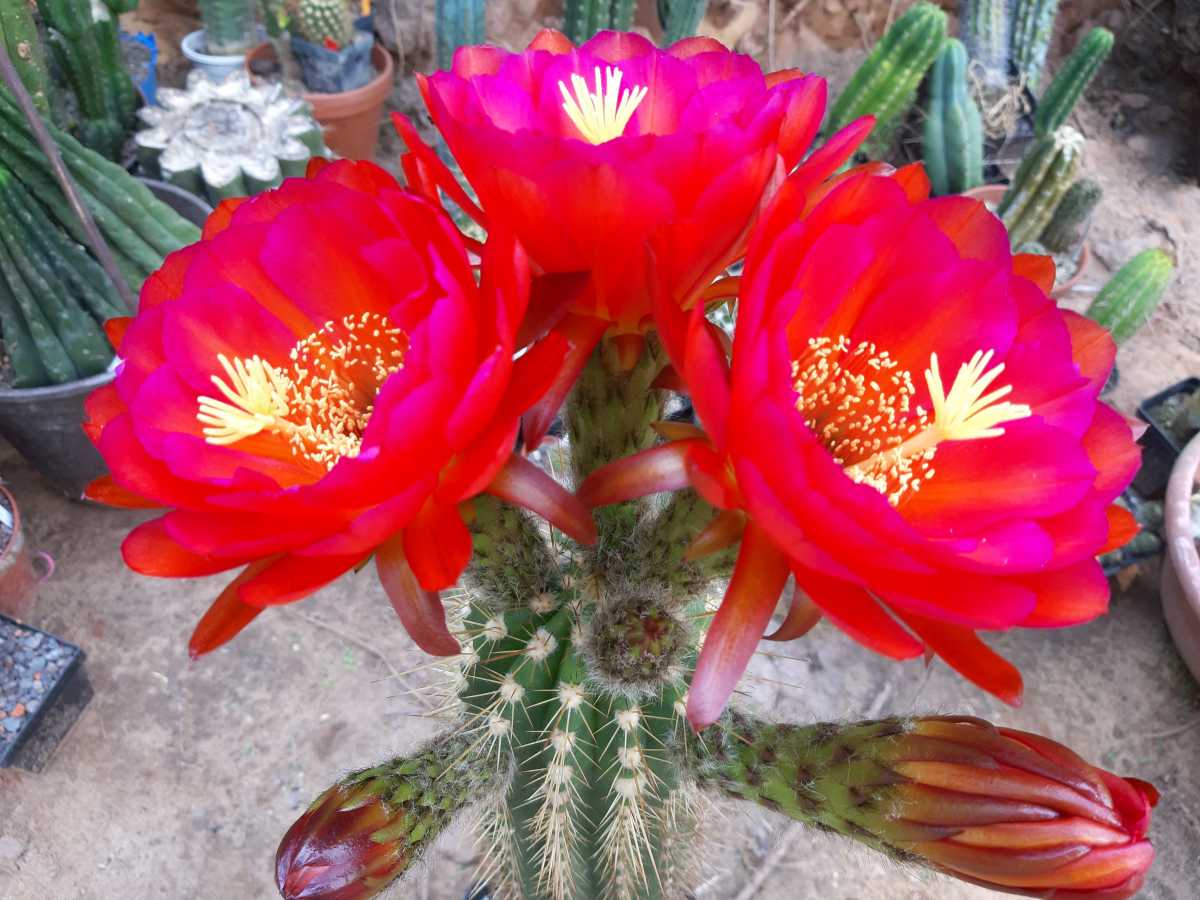 So here´s a good example for the flowering that goes on in my greenhouse during the main season. I do a lot of things to induce or promote flowering, and I usually get lots of flowers per plant. I water a lot during the early phase of the season and I also use various plant extracts to improve general health and flowering. And it definitely shows in my plants. This one here is a hybrid by Ingo Barthels with the number BS.1558.1 and I really enjoy the overall appearance of this plant in summer. The flowers are not huge, but it´s just a great overall package and the flowers look very impressive. 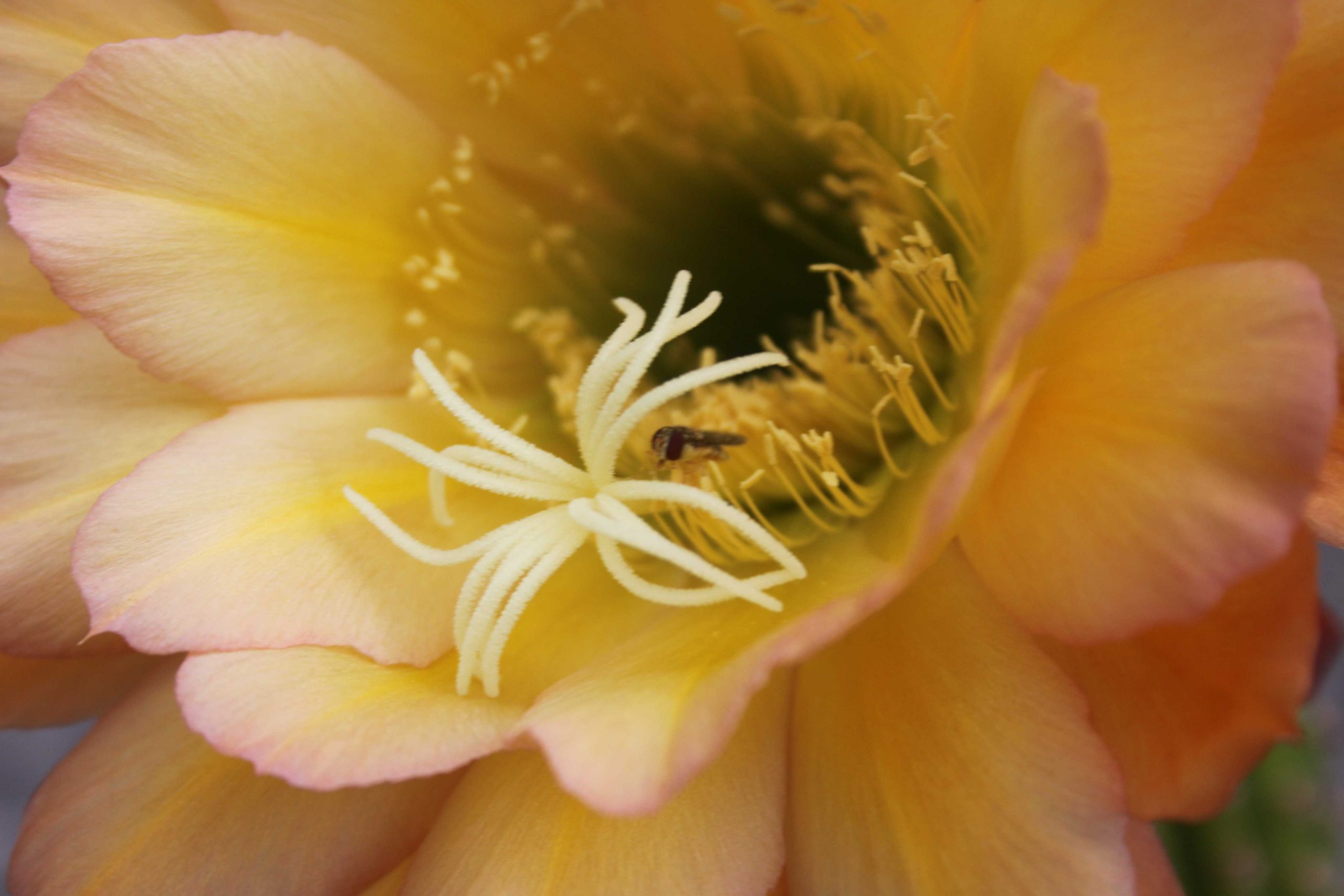 If you like the stuff we do you can support us on Patreon: https://patreon.com/cactusjerk 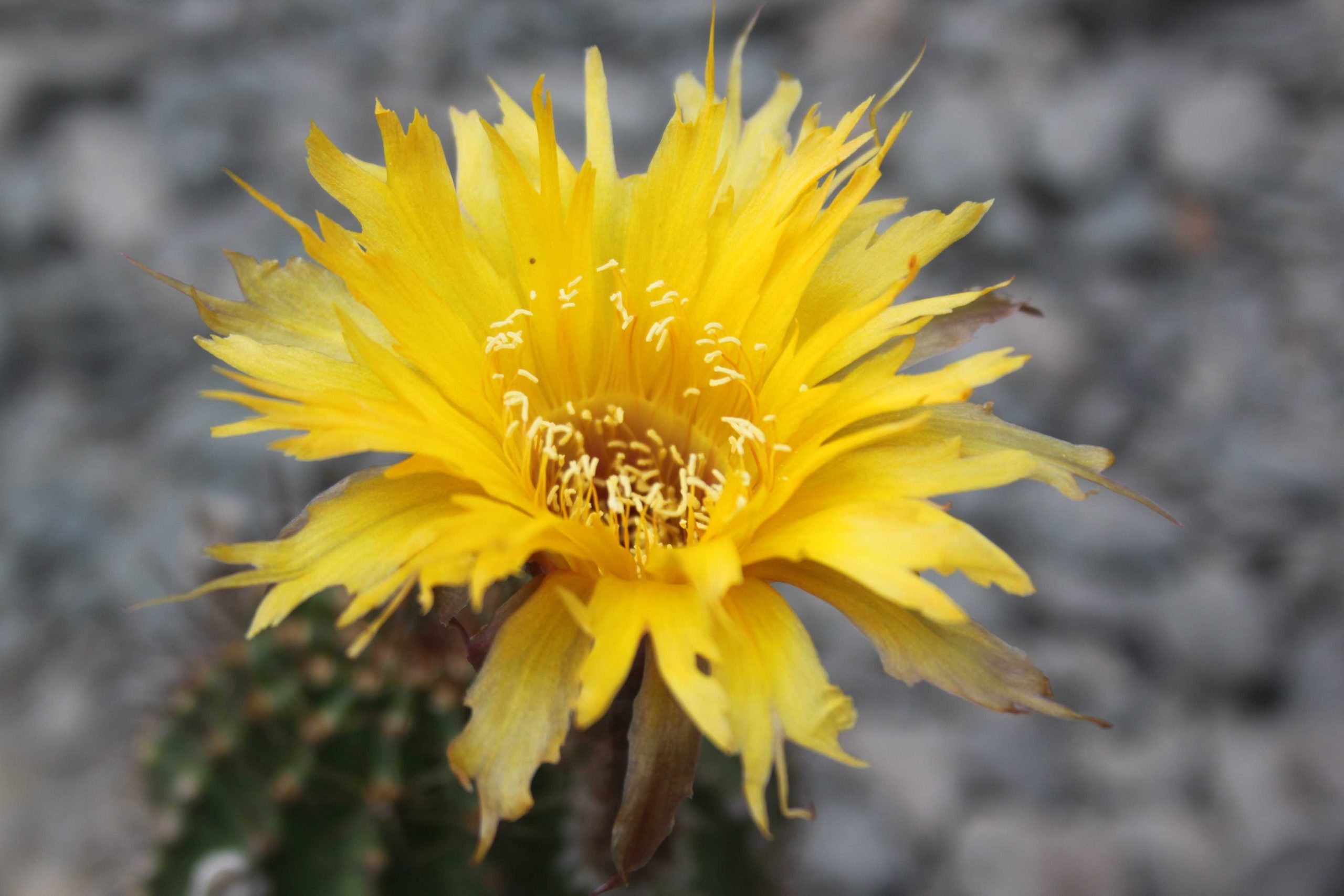 I love freaky Echinopsis and Trichocereus flowers. Ragged, Ruffled, Mutant, you name it. This one here is a ragged Echinopsis hybrid called STERNSCHNUPPE GEZACKT and I love using it as father in my crosses. It´s a bit genetically messed up, so it´s hard to get seeds from it as mother. Not impossible, but very difficult. I had to graft a stigma from another plant to get some seeds. Talking about having to go the extra mile.

I think the breeder of this gorgeous plant is Thomas Stöfer. 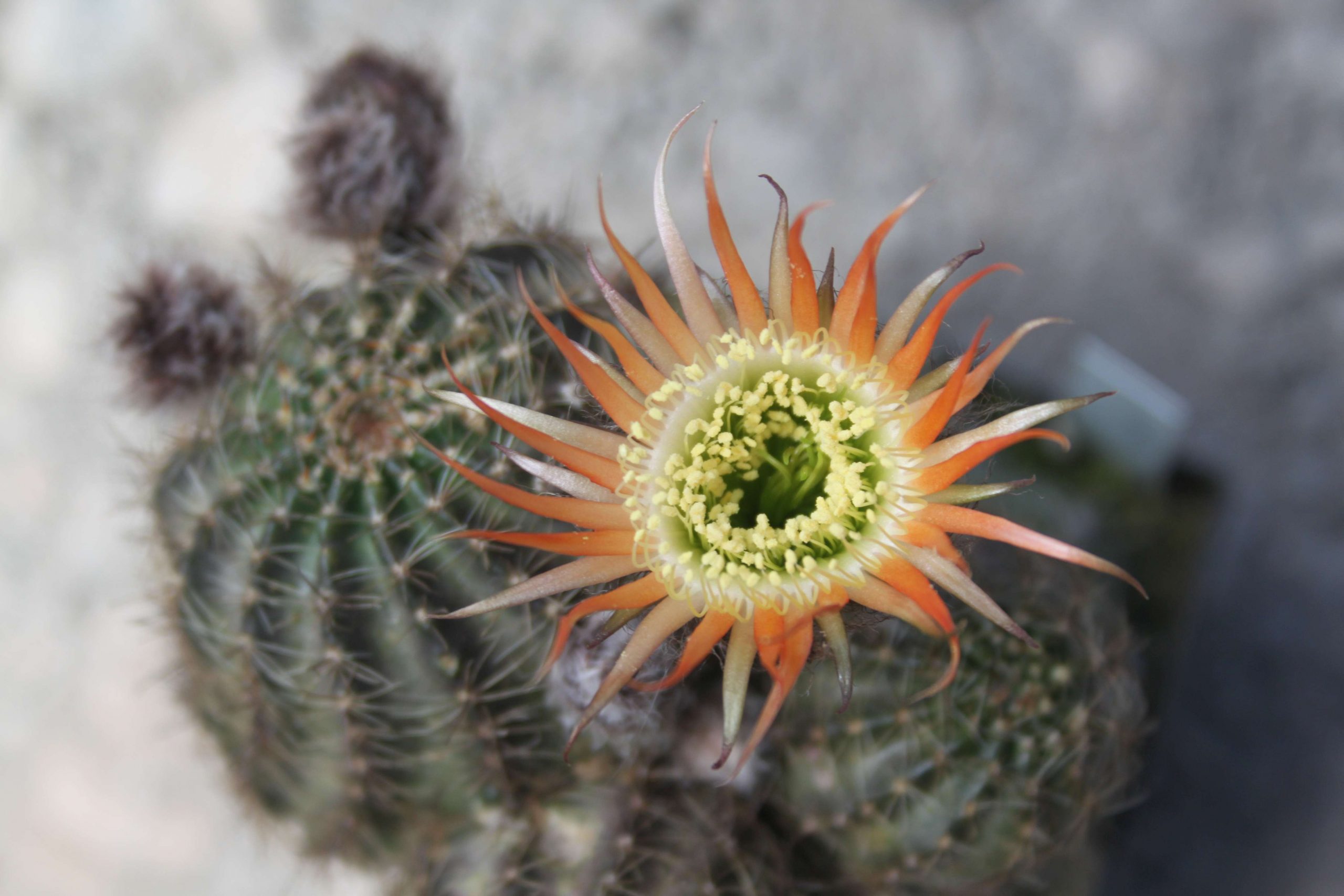 STERN VON HEMSBACH is a fantastic Lobivia densispina hybrid with bizarre looking freak-flowers. The flower mutation looks very much unlike the flowers of Lobivia densispina usually look like and I´ve been using it in a few crosses this season. 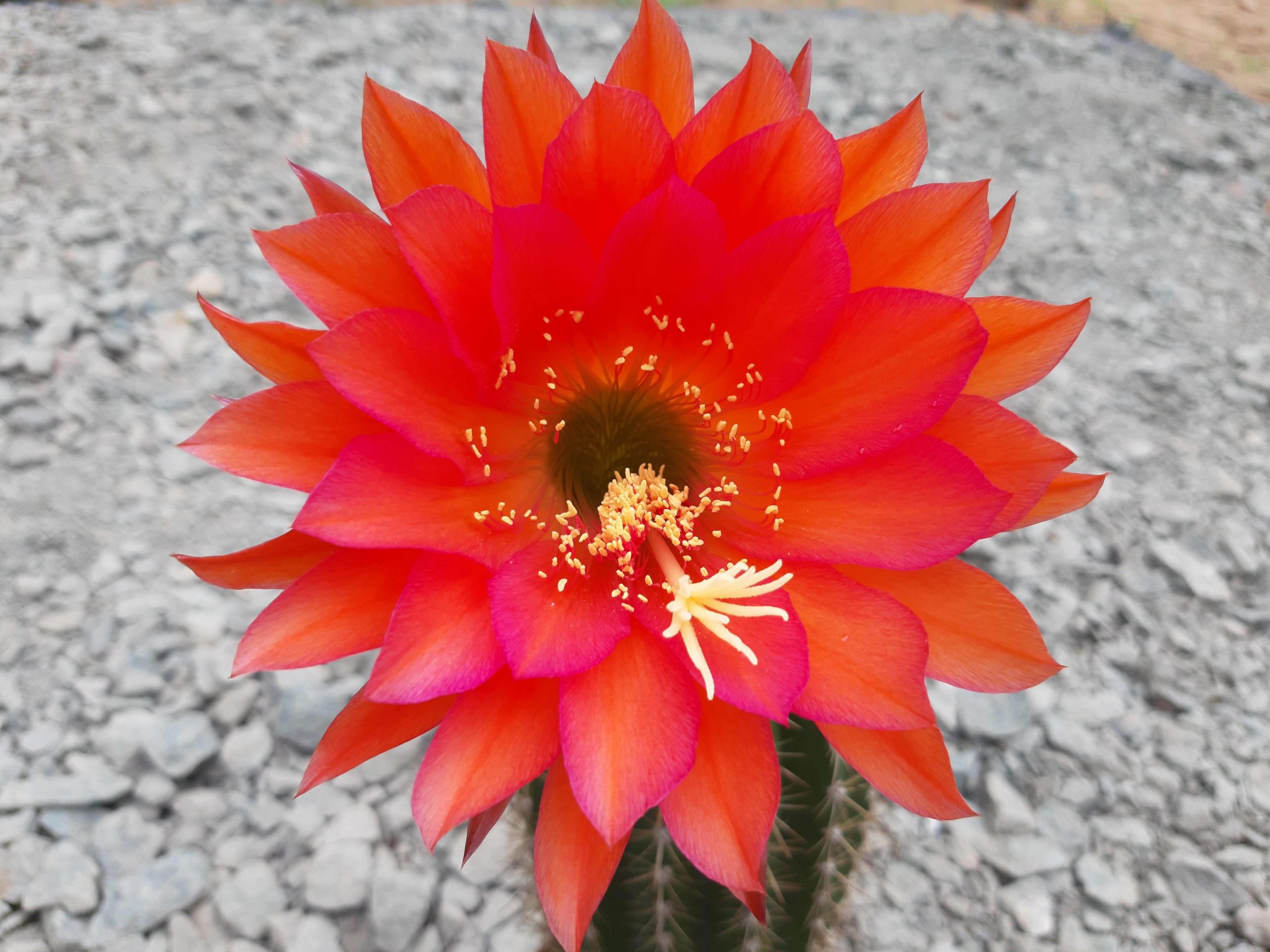 This hybrid comes from an Uwe Kahle cross from 2012. The breeder´s code is KA.2012.61.09 and the parents are Takoradi x Flying Saucer. Both are excellent parents and most seedlings from this cross that I have seen looked great. Definitely a gorgeous hybrid and I´ve been making lots of crosses with this particular plant. 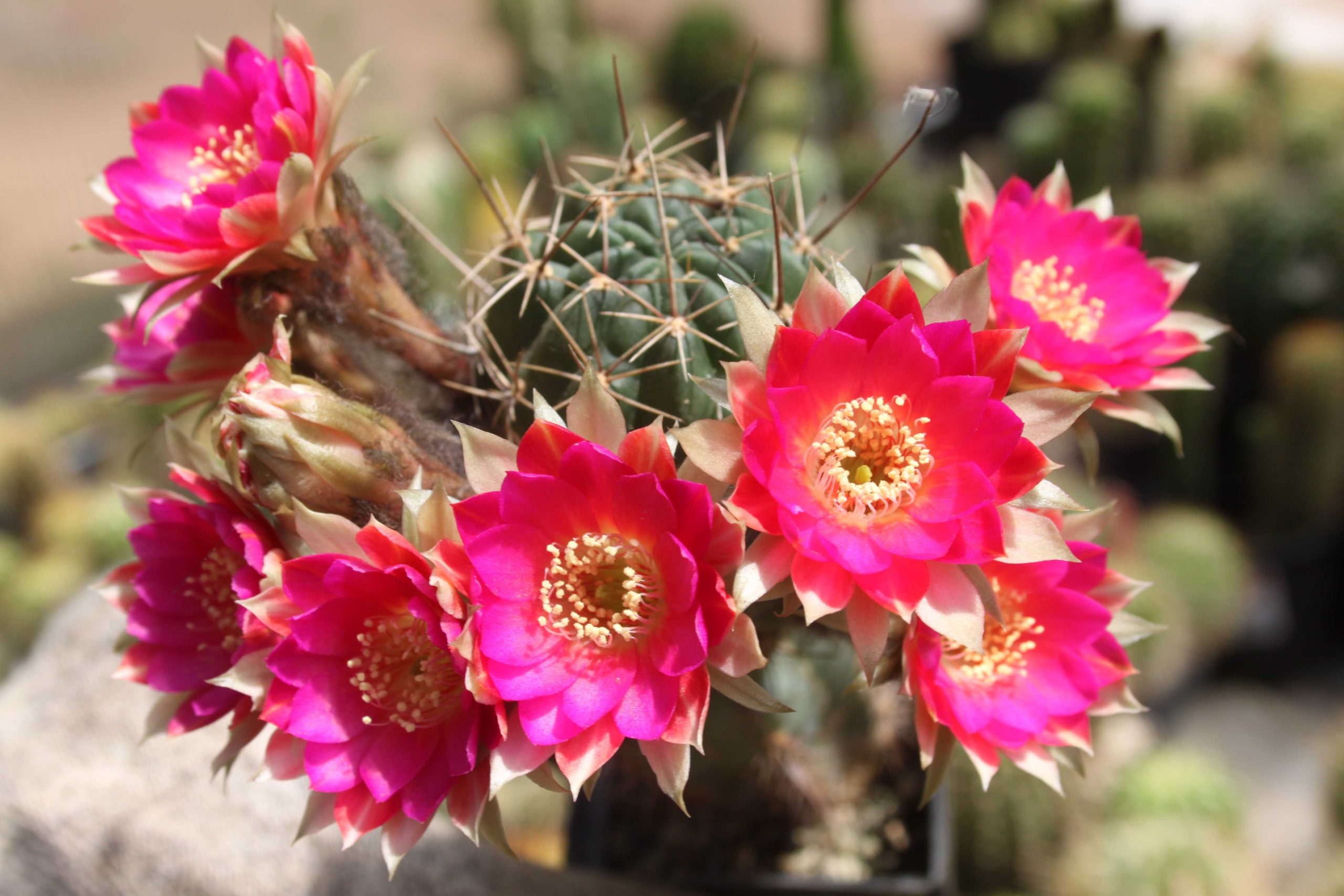 Mini Flower Parade! This is the Lobivia hybrid LEWITZSONNE, which is a hybrid that came from a German cactus nursery and was selected and distributed by the German breeder SAP. Full flower pollination video coming up soon! 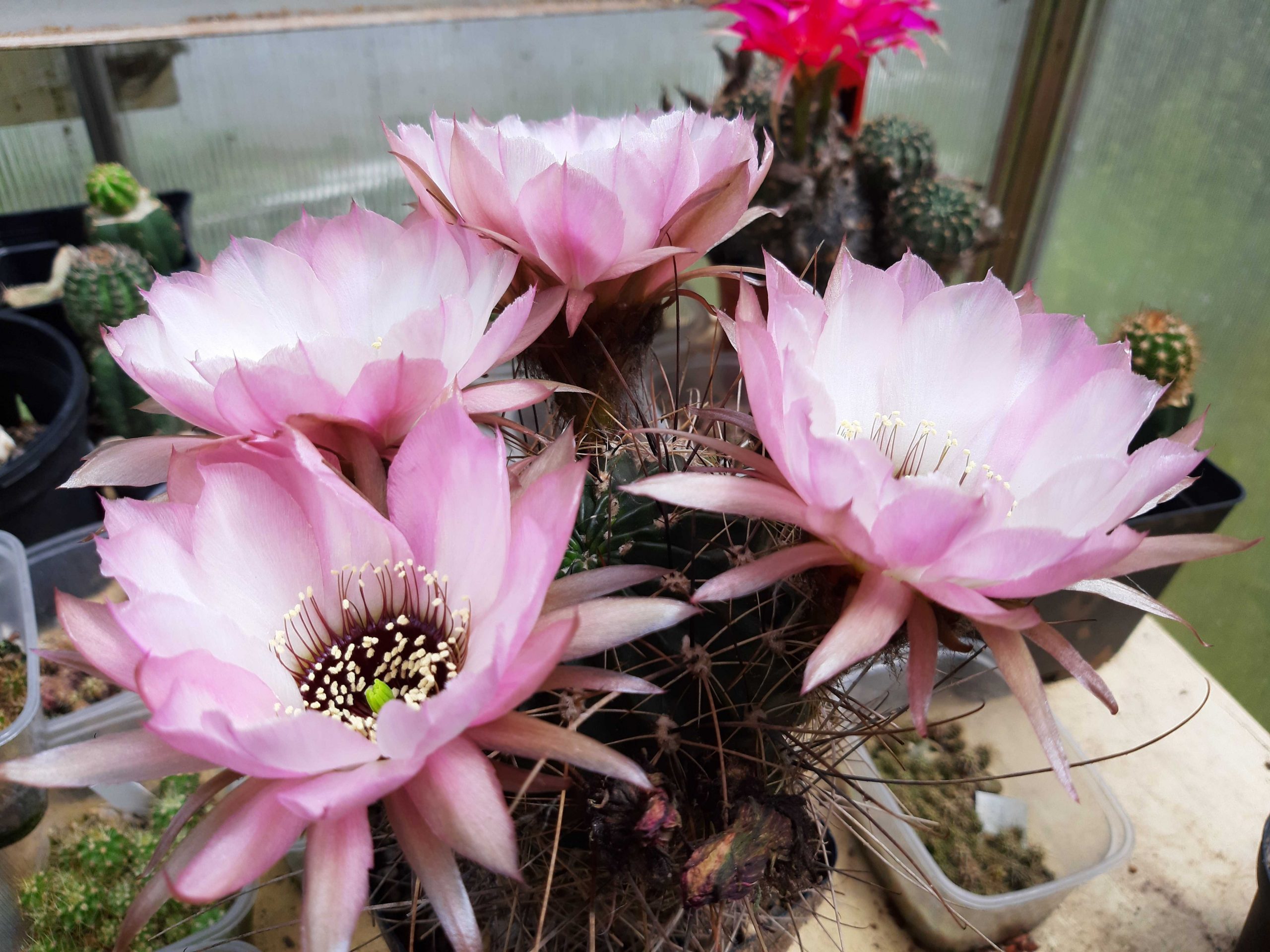 My large Lobivia Anemone mother plant pushed out lots of flowers in the 2019 season and this gorgeous flush came out early in the season. Lots of gorgeous cactus flowers with a black throat. Was able to pollinate various of them with stuff like Lobivia winteriana and cannot wait to see what comes from the seeds.

If you like the stuff we do, you can buy seeds through our website at Trichocereus.net/shop, subscribe to our newsletter or help us to keep the doors open by supporting us through Patreon.com/trichocereus 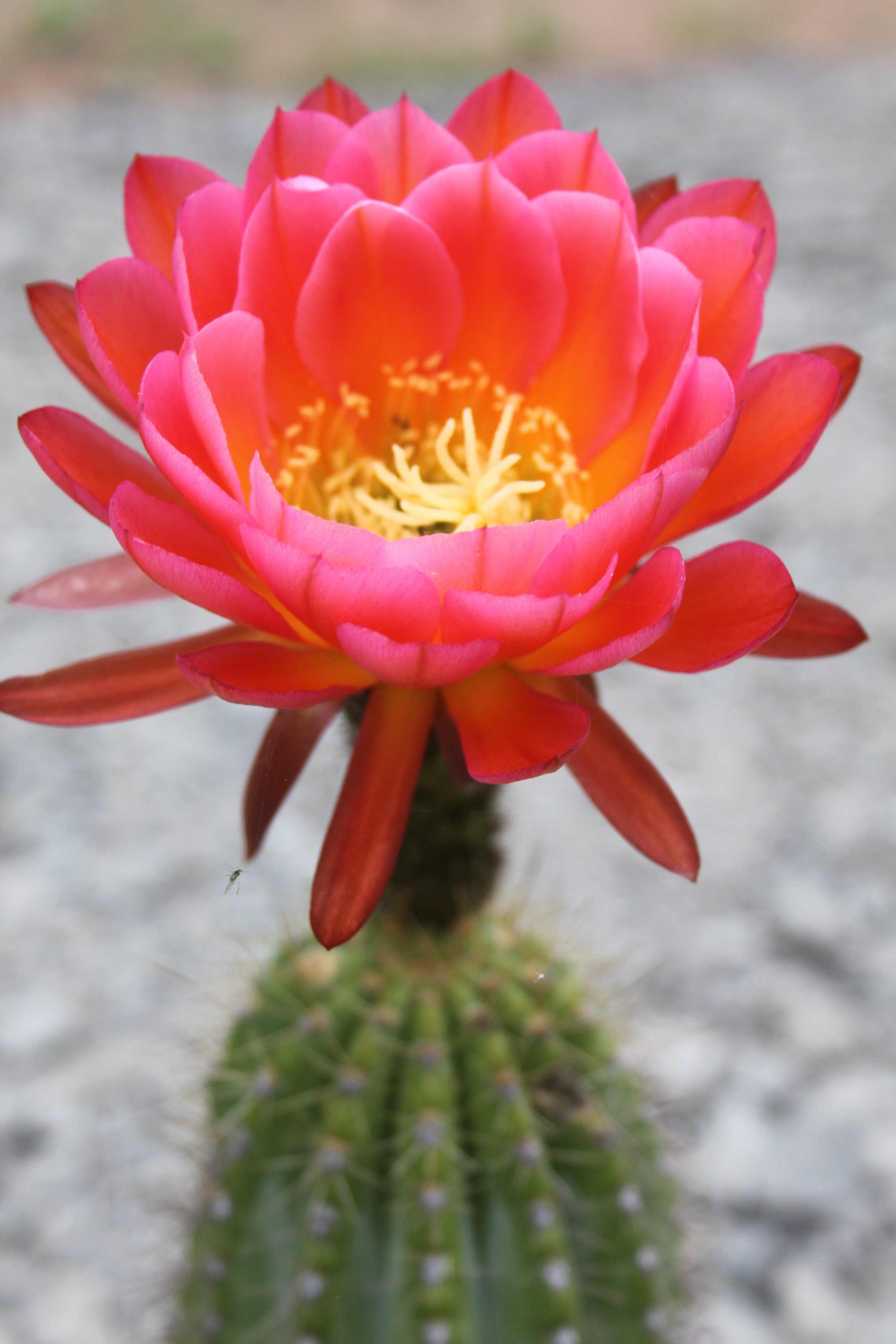 Various things are happening in this video. I can´t read my own writing, which happens way more often than I would like to admit. Also, I am pollinating this gorgeous Trichocereus hybrid that was grown from a cross between Flying Saucer x Dione. I am pollinating the flower and collect pollen for pollination of other cacti.

If you like the stuff we do, you can buy seeds from this particular cross through our website at Trichocereus.net/shop or help us to keep the doors open by supporting us through Patreon: https://patreon.com/trichocereus. 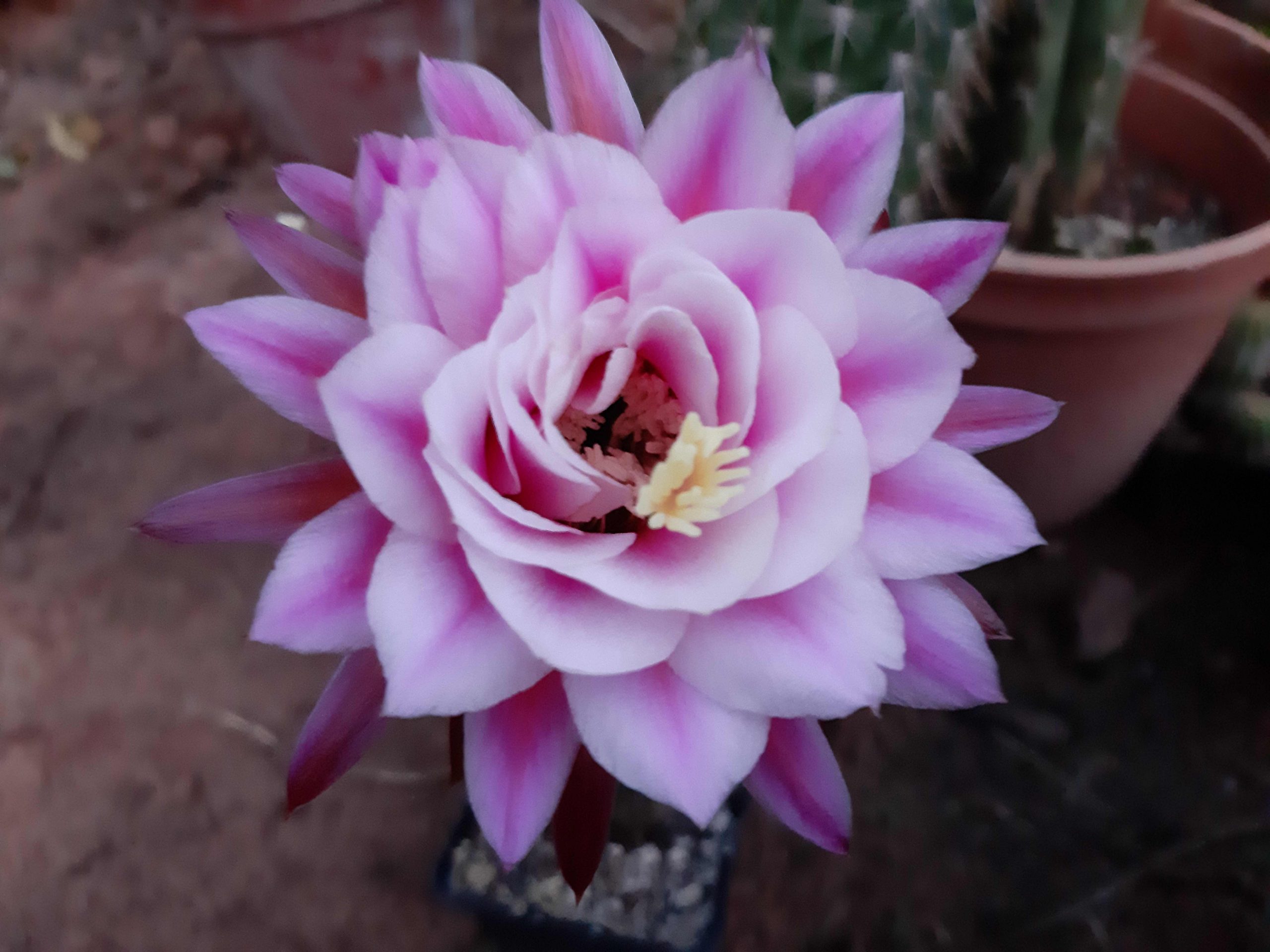 This gorgeous hybrid by Uwe Kahle was grown from the cross KA.2007.0040 and the parents are Fugu x (Abendrot x Yellow California). The flower has a very unique shape and it´s just a very funky plant. I mostly bought this because of how much my wife loved it and I´ve been using it in various crosses this year.

If you like the stuff we do, you can buy seeds through our website at Trichocereus.net/shop or help us to keep the doors open by supporting us through Patreon: https://patreon.com/trichocereus.