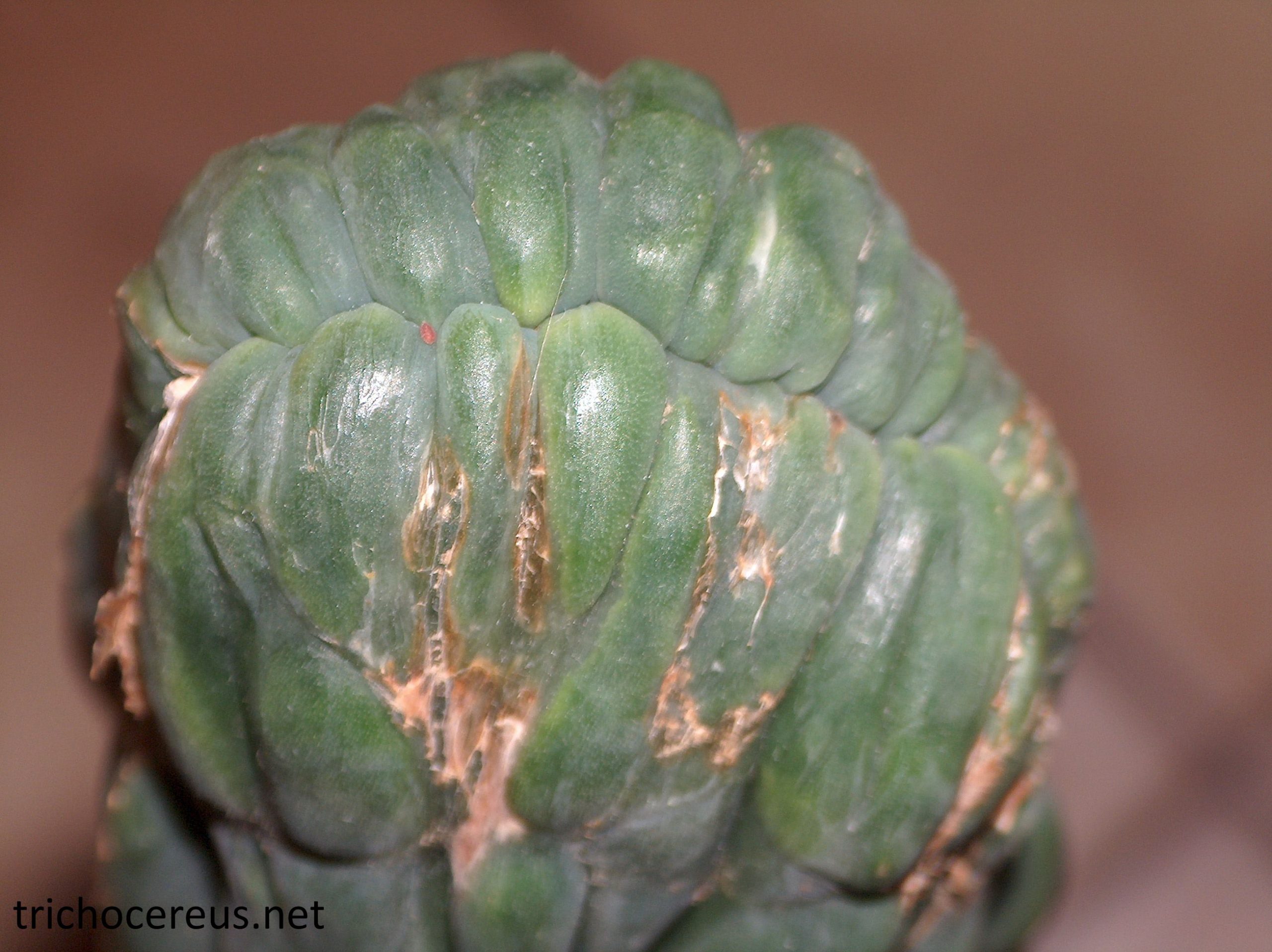 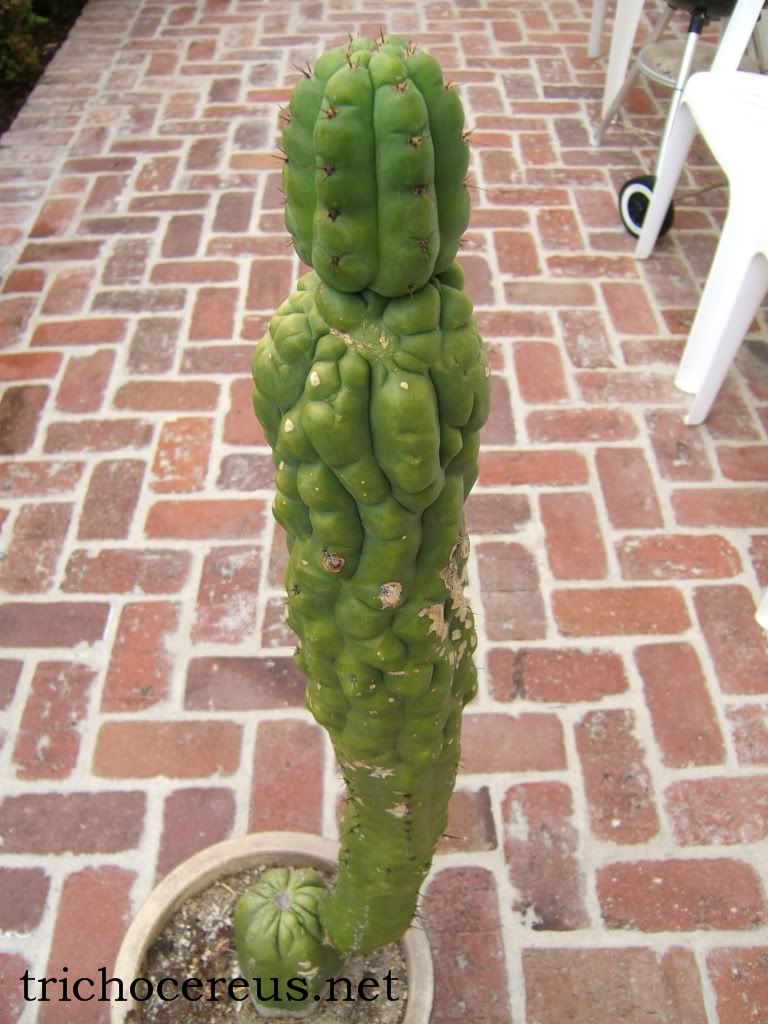 TPM (Trichocereus peruvianus Monstrose) comes from a SAB member called Nitrogen. He earned himself a great reputation by producing some of the most kickass San Pedro hybrids in the past 10 years. Some of his mother plants are the TPM, the TPC or the TPQC. Though the plant looks more like a Trichocereus peruvianus, it is often referred to as Trichocereus pachanoi Monstrosa.

This particular TPM constantly switches between montrose and non-monstrose growth, what gives it a truly unique look. This type of TPM is one of a kind, as it is known to pass down the monstrose gene to its F1 offspring. From all the seeds I´ve grown, I had a 50% mutation rate. And since it is rare that mutants produce mutant offspring, it’s definitely an amazing plant.
Nitrogen produced numerous hybrids with this plant, of which I´ll show some of them here.

In 2012, Nitrogen used this plant for the following crosses: 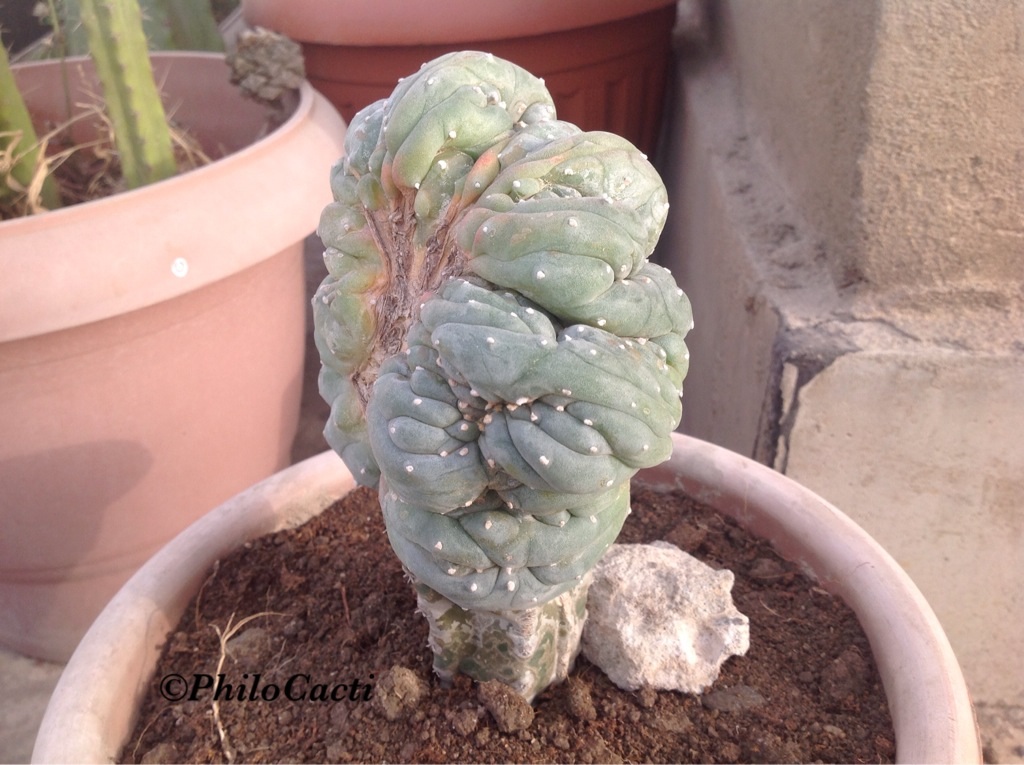 I know that those plants actually don´t belong on a Trichocereus Website. But as most of our friends are heavily into Lophophora Growing, I decided to create a page that shows a couple of interesting Lophs.

The plants called Lophophora can be found throughout many collections all over the world.  Though the cacti have a bad reputation in the eyes of many serious growers, they absolutely don´t deserve that. They are beautiful plants that are among the most amazing cacti that we know today. I´ve been working on a couple other Lophophora projects. Well, first of all, I started the website lophophora.de, that was supposed to be German and English. However, I feel like it´s kinda distracting to have the two languages on a .de website. So I registered Lophophoras.com and will start an all-english website on that domain during the next years. Everyone who knows me, is probably aware of the fact that it might take me a couple of months until the website is all done and ready, so please give me a little time if you are interesting Lophophoras and want to see more pics and descriptions. I am ALWAYS looking for cool pics of Lophophoras and Trichocereus and if you want to donate some, please let me know and I´ll put you in my book of cool people. You can contact ne through our Lophophora Facebook Group or the Trichocereus Facebook Group.

But now, enough of me and let´s add a short description of these wonderful plants:

Lophophora Williamsii was originally described as Echinocactus williamsii. The man who described it was the very well known cactus grower and botanist Salm-Dyck. The genus Lophophora can be found in some, southern parts of the United States of America and Mexico. The name comes from the combination greek word LOPHOS, which means Crest and PHOROS, which means bearing or carrying.

Those plants are known as all kinds of indigenous names, like Peyote or Peyotl.

Some of the earlier names are Echinocactus williamsii, Ariocarpus Williamsii, Anhalonium williamsii or even Mammillaria Williamsii. You see that the genus Lophophora has a very interesting past and taxonomists were unsure where to put them. Their small flowers are somewhat similar to the ones on Mammillaria, though the thought of them being integrated into the genus Mammillaria seems rather strange.

Description: Lophophoras usually have a dark blue to gray colored epidermis and their body mostly consists of a large tap root that partially grows under the soil. They have 8 to 10 ribs, though most of them actually have eight. Compared to other cacti, they are very slow growers and that´s why most growers tend to graft them very early on, to get them to a bigger size fast. In the wild, a Lophophora can take up to 25-30 years to reach maturity. Now, grafted plants can start flowering after 2 years or even less, depending on how much fertilizer you pump into the plants. However, grafted specimens to have the typical tap root.

There are many different varieties and forms available on the open market and collectors & taxonomists are arguing about the number of species that exist. I personally think that the number of described species during the past 100 years was ridiculous and that many of the species that were described in the past should not stand, because it´s very normal to see great variety within the range of a species. A duck with a slightly different hair color is still a duck and not an elephant.

In the past, there were four species accepted by taxonomists: Lophophora Williamsii, Lophophora Diffusa, Lophophora Fricii and Lophophora Viridescens. Now, these days, most botanists only accept two species. Lophophora Williamsii and Lophophora Diffusa. But despite that, I will keep old names of species and varieties on my pages because it helps us to keep track of the plants that grew from a certain seed type or collection name. I also use the name Lophophora Jourdaniana, though I am fairly certain that it is some kind of commercial hybrid and not a real, botanical species. I will write a lot more about species, varieties and how to breed them on the lophophoras.com website. But since this is really close to Off-Topic on a Trichocereus website, I won’t include it here as well.

Where to buy Lophophora seed or plants? Well, there are quite a couple sources for Lophophora seeds and plants. Köhres is probably the first and foremost address to buy Lophs. They have some high-quality Loph seed from time to time. However, I also had some seed that was either unviable or had a lot of issues with fungal infections. I can only guess that they have so many plants, that they sometimes keep the berries on the plants for a very long time, what leads to them having a higher rate of fungal infections. But again, they are very friendly and if you get a bad batch of Loph seeds from them, they are usually very helpful and replace it. At least that´s what I heard about them. They probably have so many plants that they can´t really test the viability of every batch and because of that, there can be bad batches. It´s been a long time since I last tested their seed, but they had very good types and very bad ones. But again, it´s probably best to ask them about what seed is fresh and has the best viability. Apart from that, there sometimes are Lophs on Ebay. But those are actually labeled Ariocarpus or Anhalonium. I still remember the times when you could buy HUGE Lophs on eBay (some that were sold by Köhres) but those times are unfortunately over and most what you get are small plants of Lophophora Caespitosa, which is extremely common in some parts of the world. Please note that I am a European and the plants will most likely not be available on ebay US. 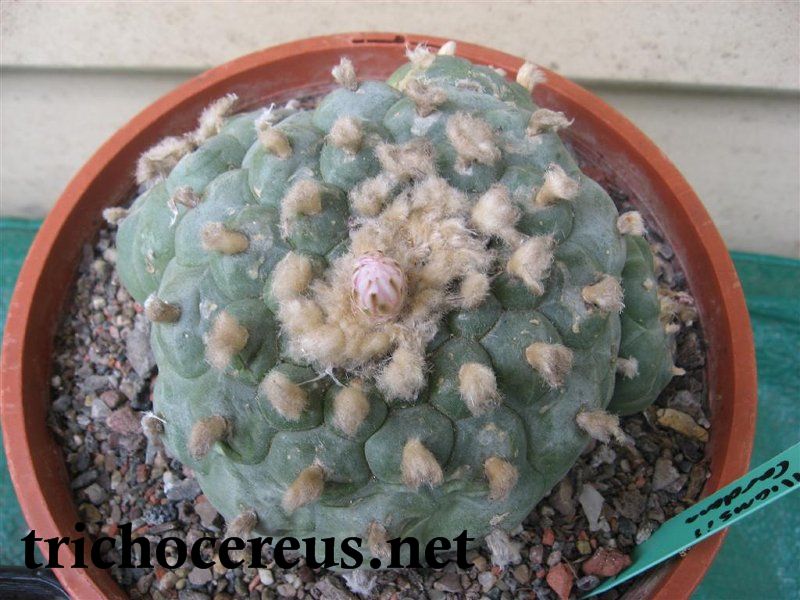 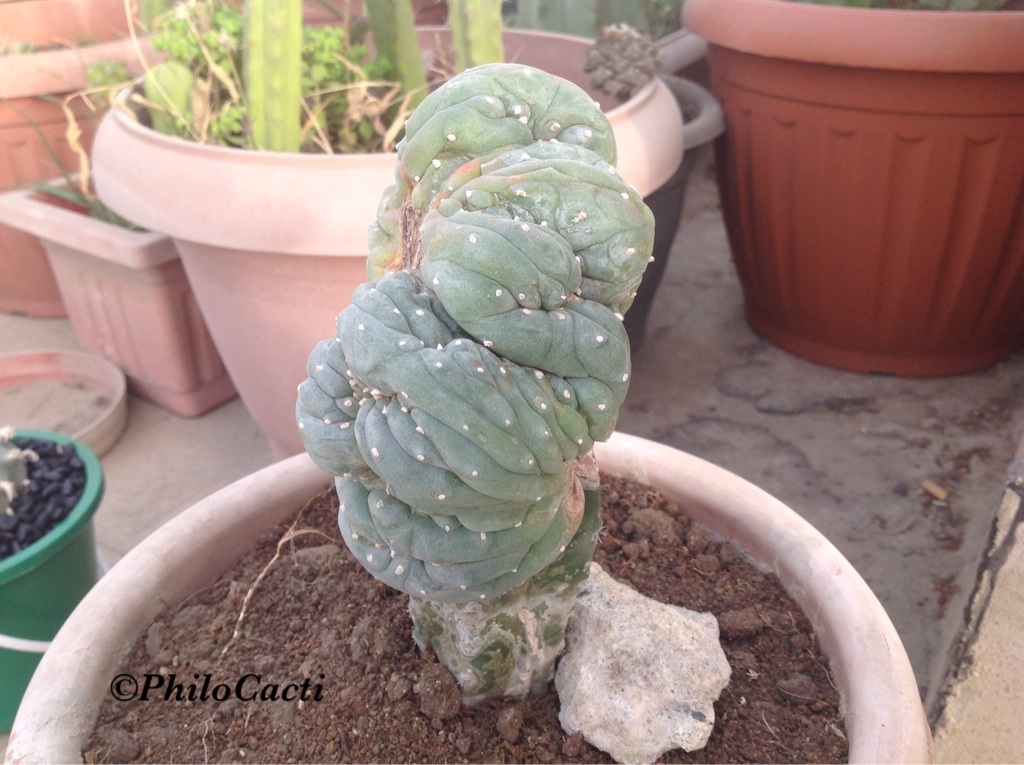 This is an amazing Monstrose. Pic: Philocacti 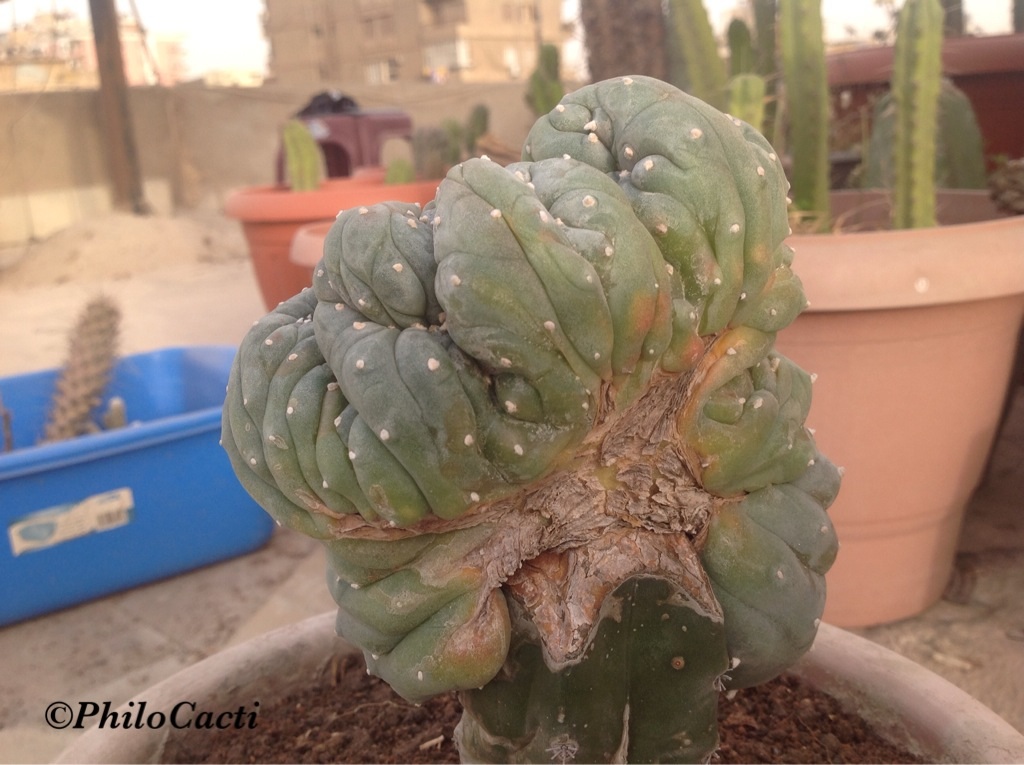 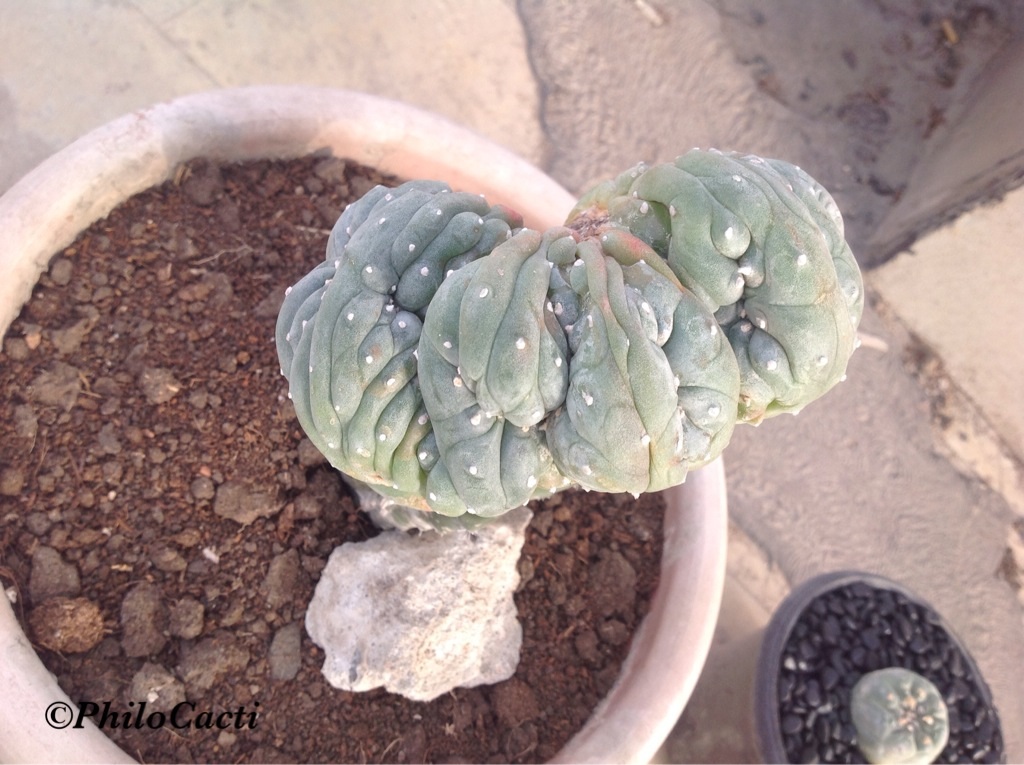 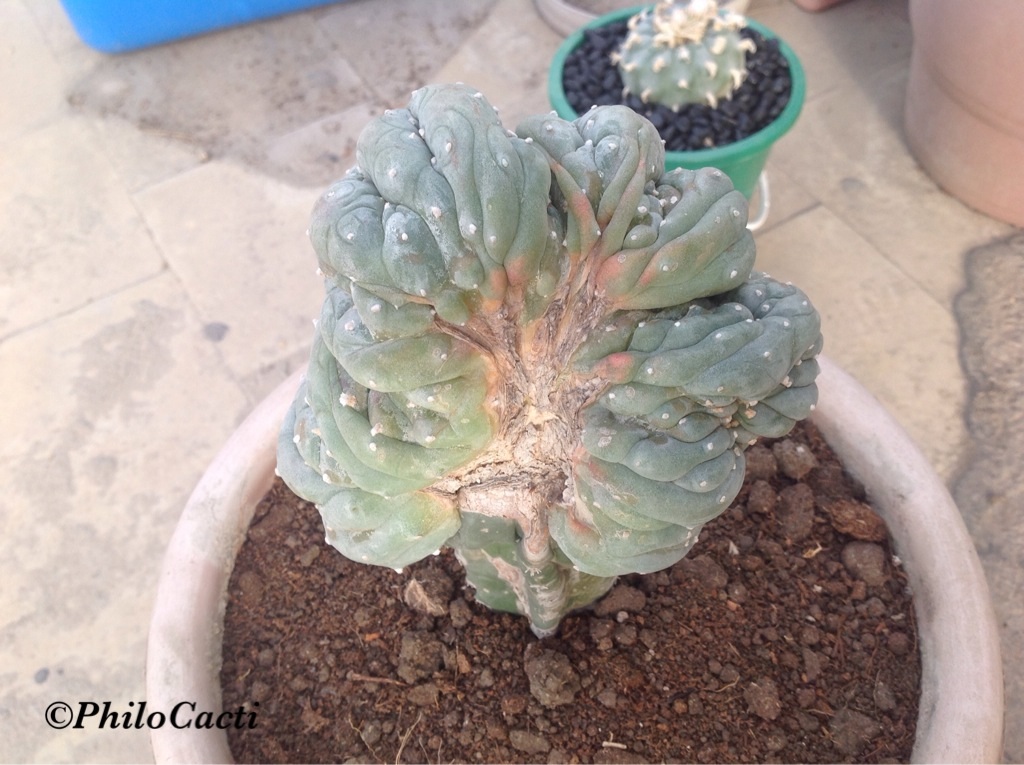 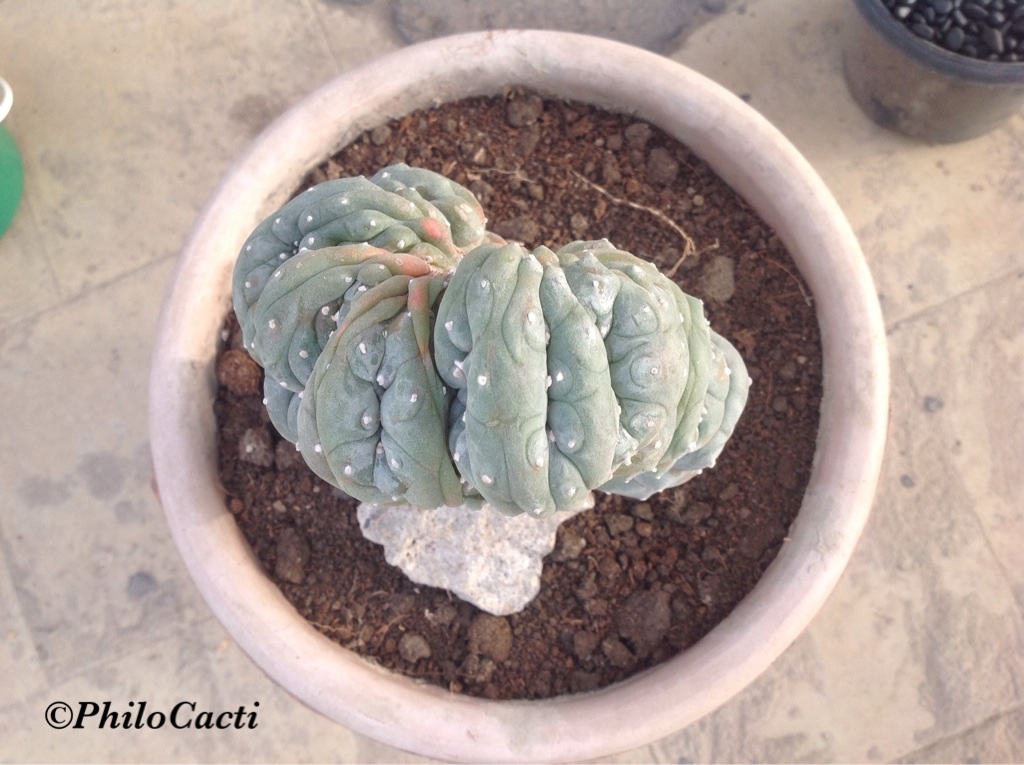 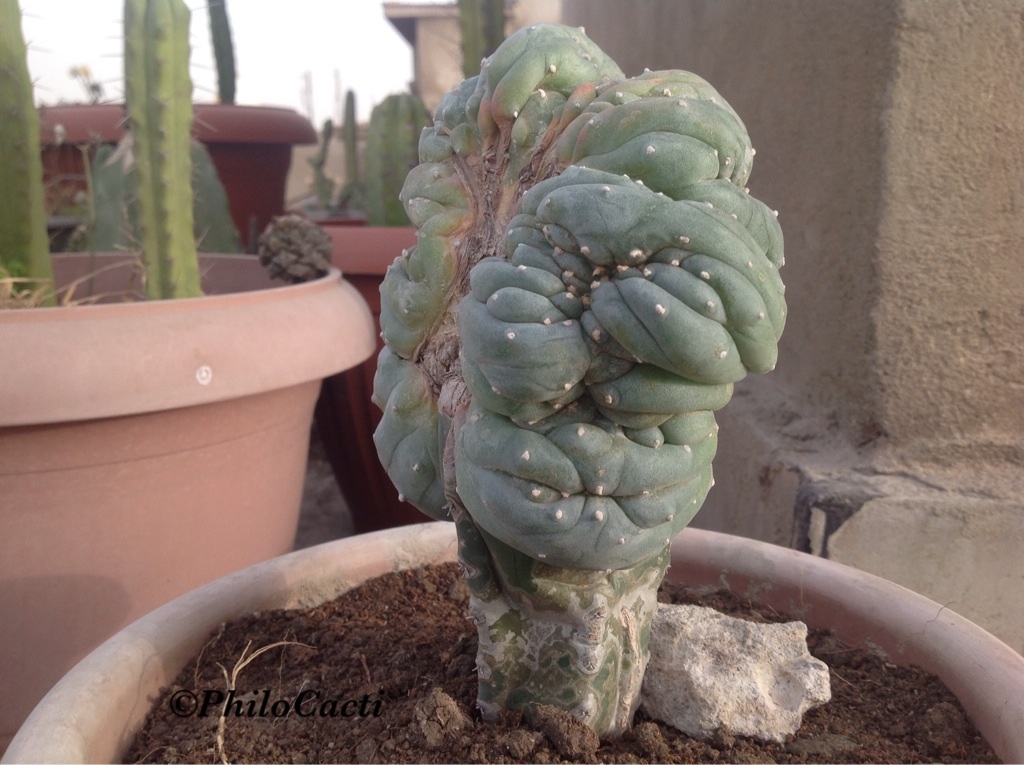 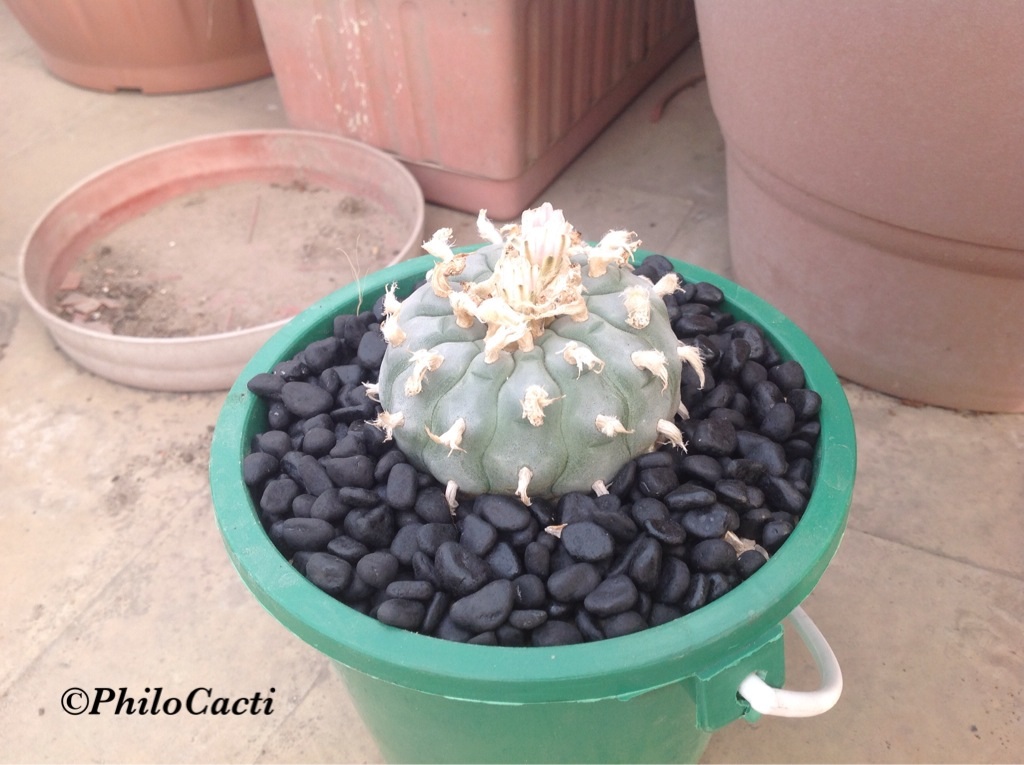 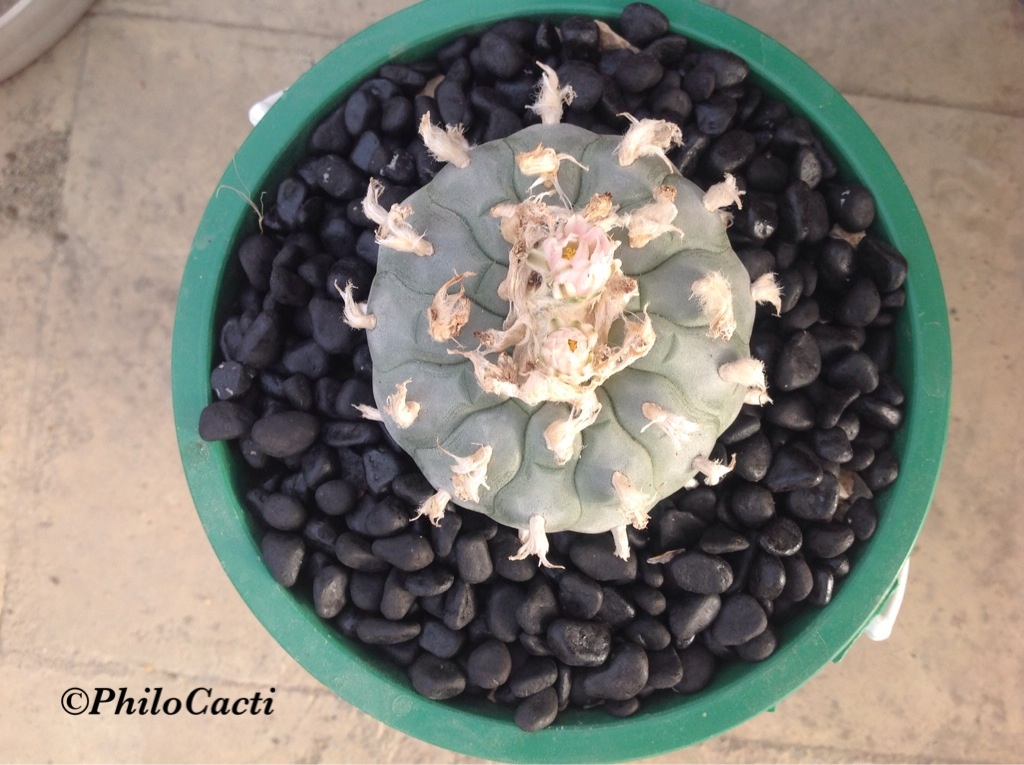 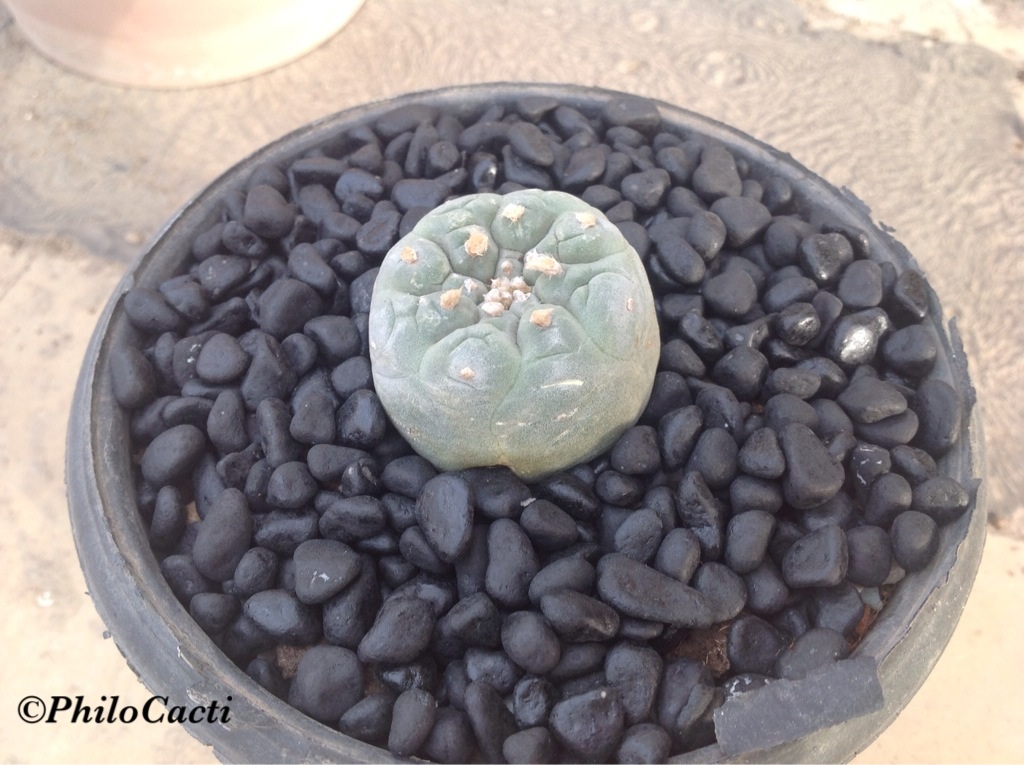 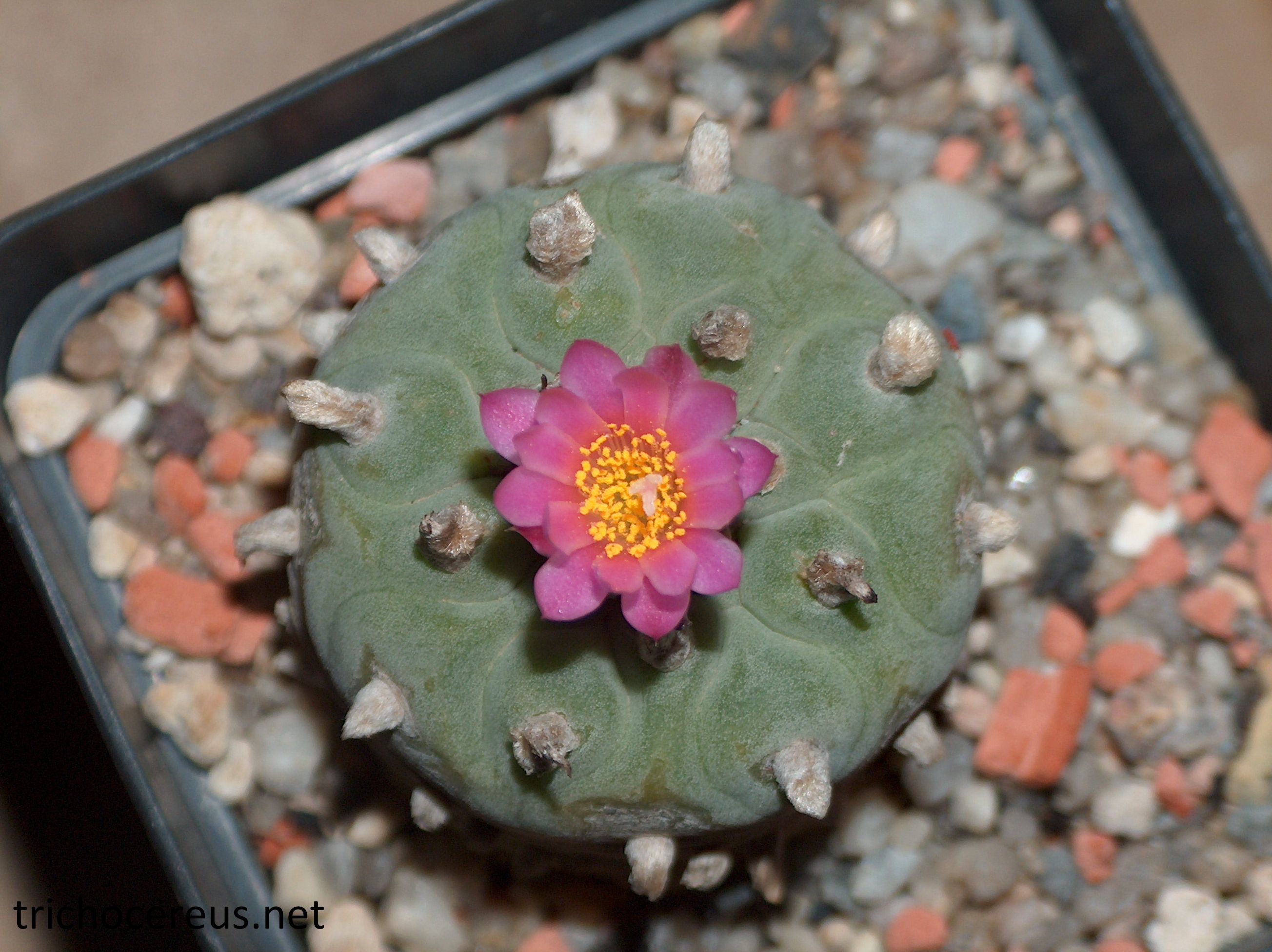 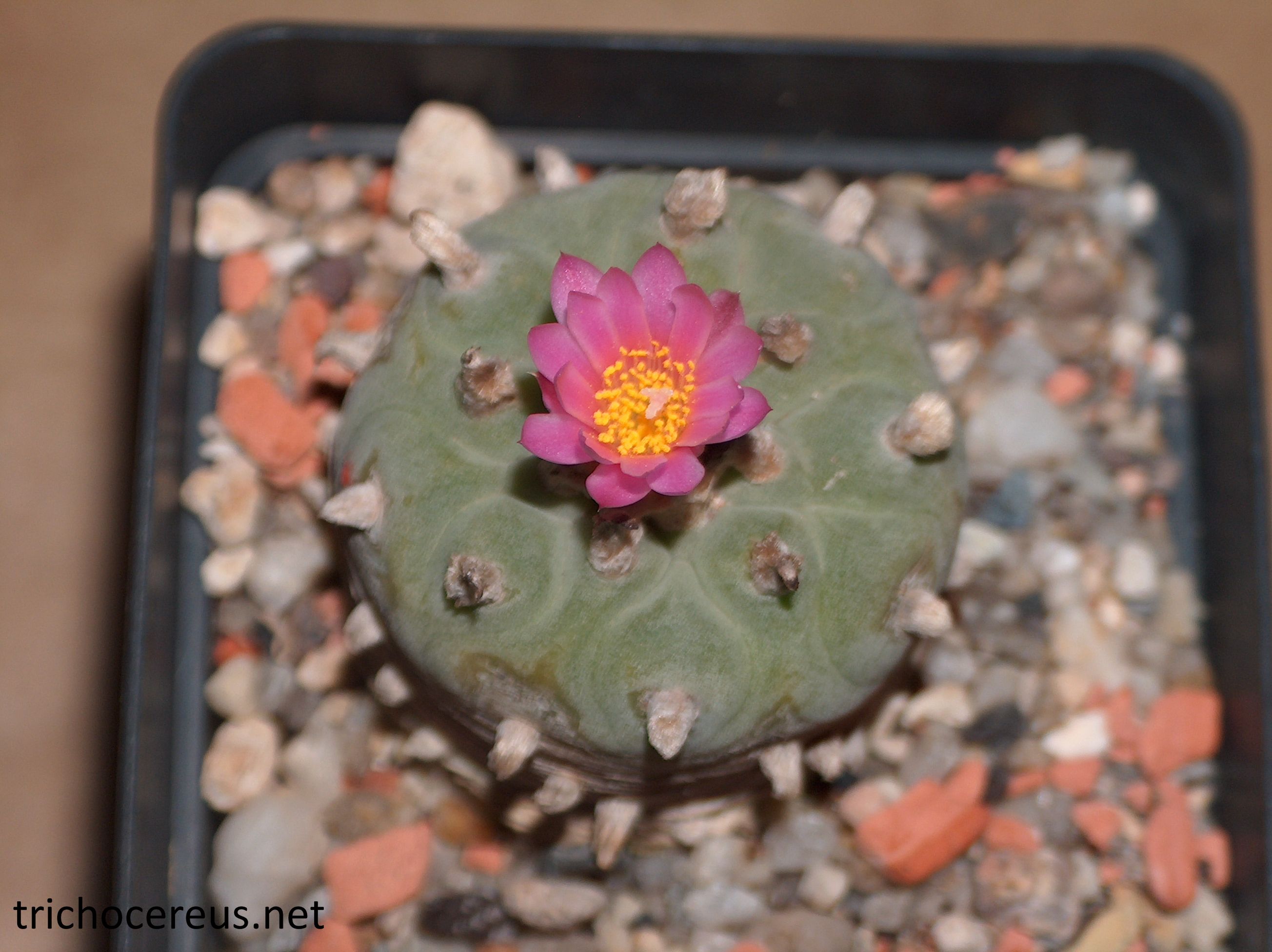 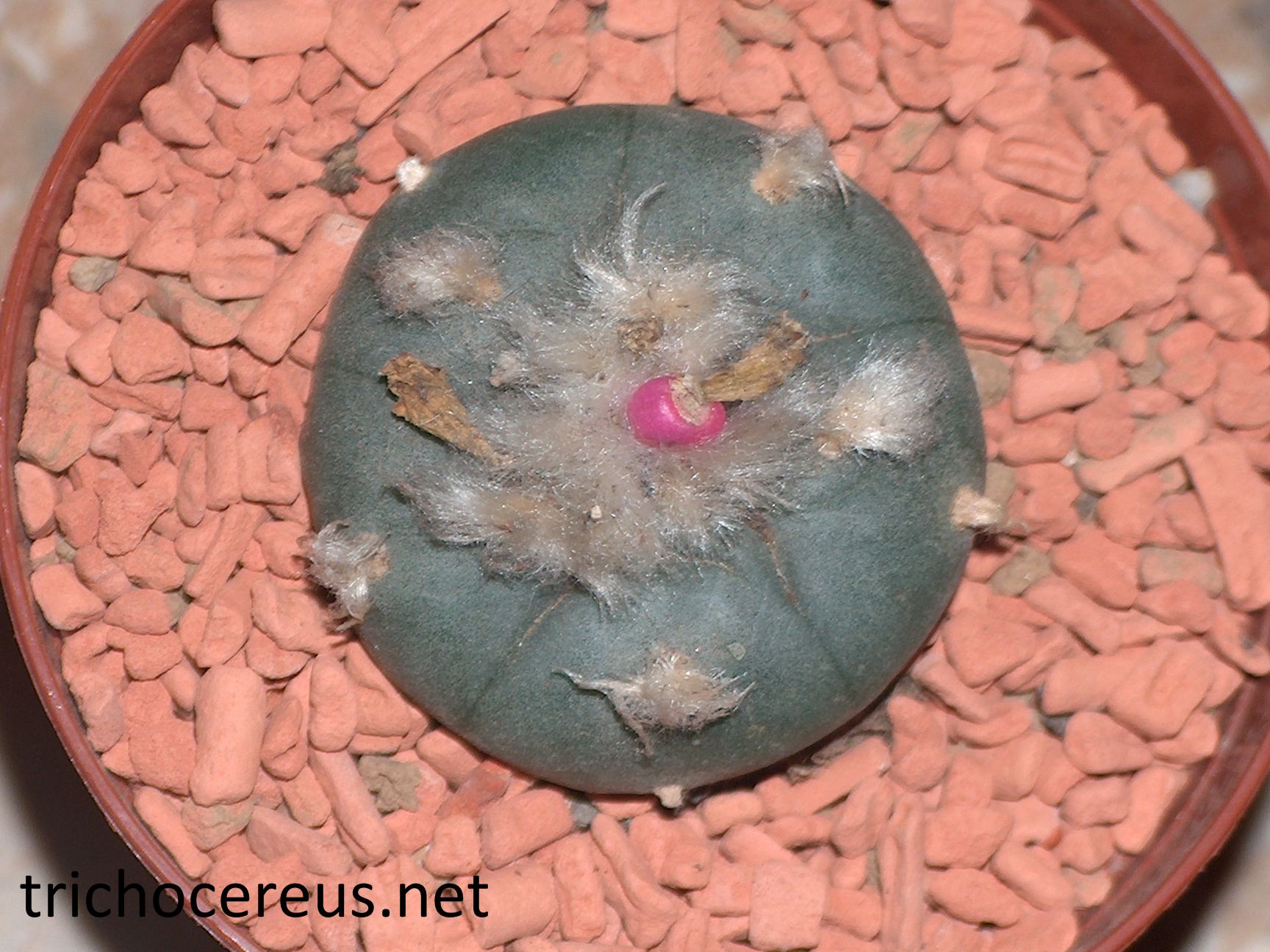 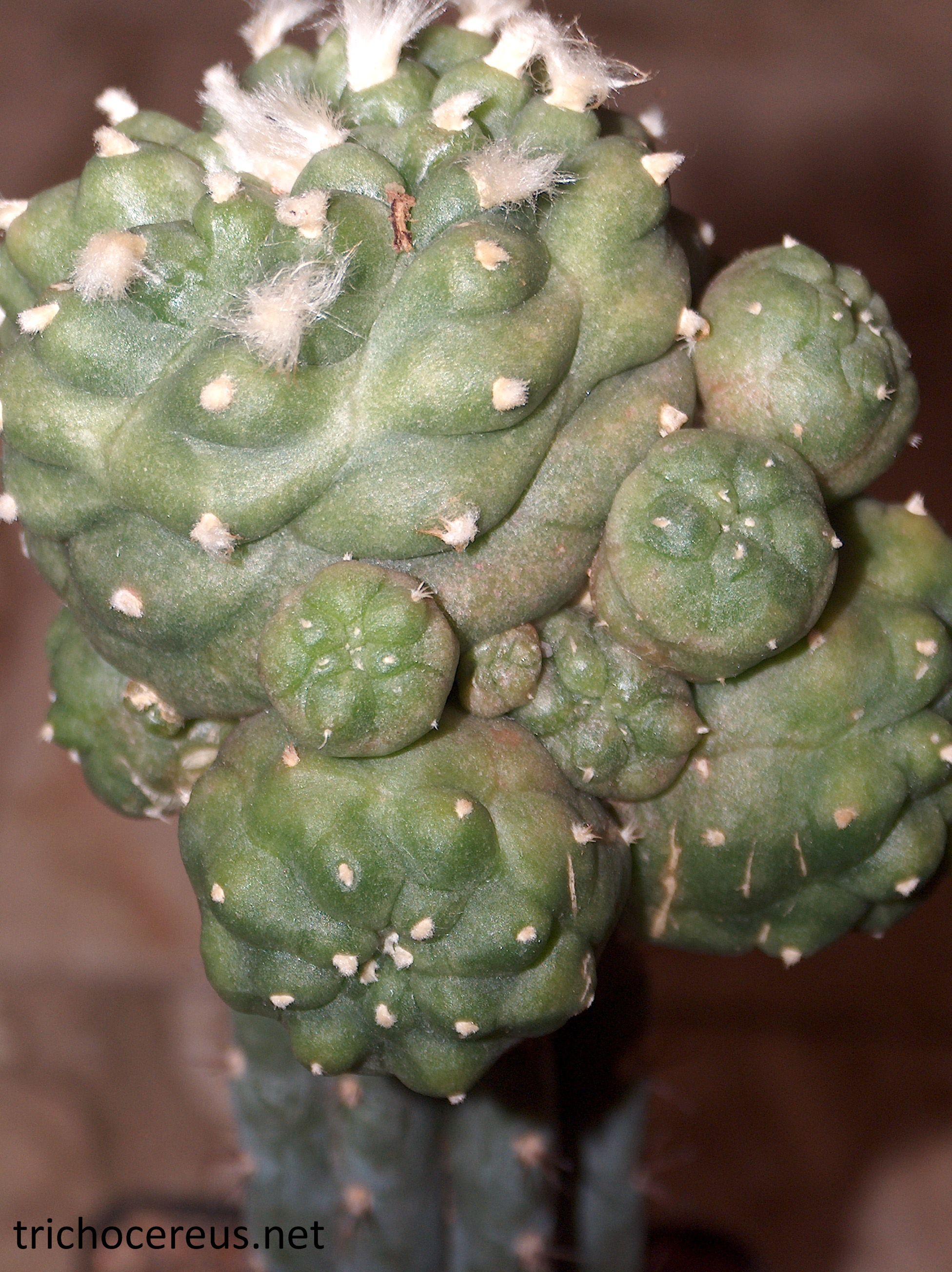 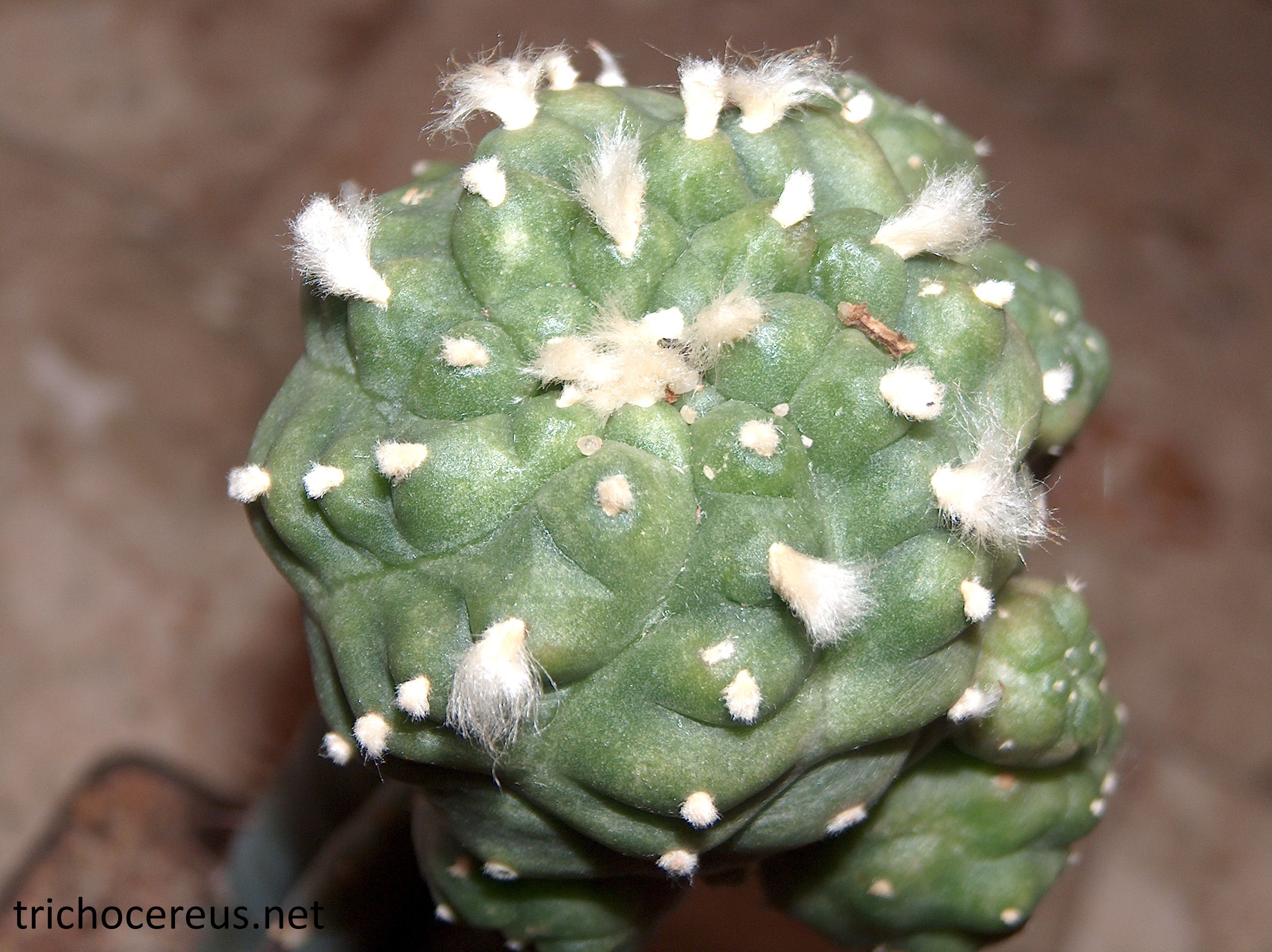 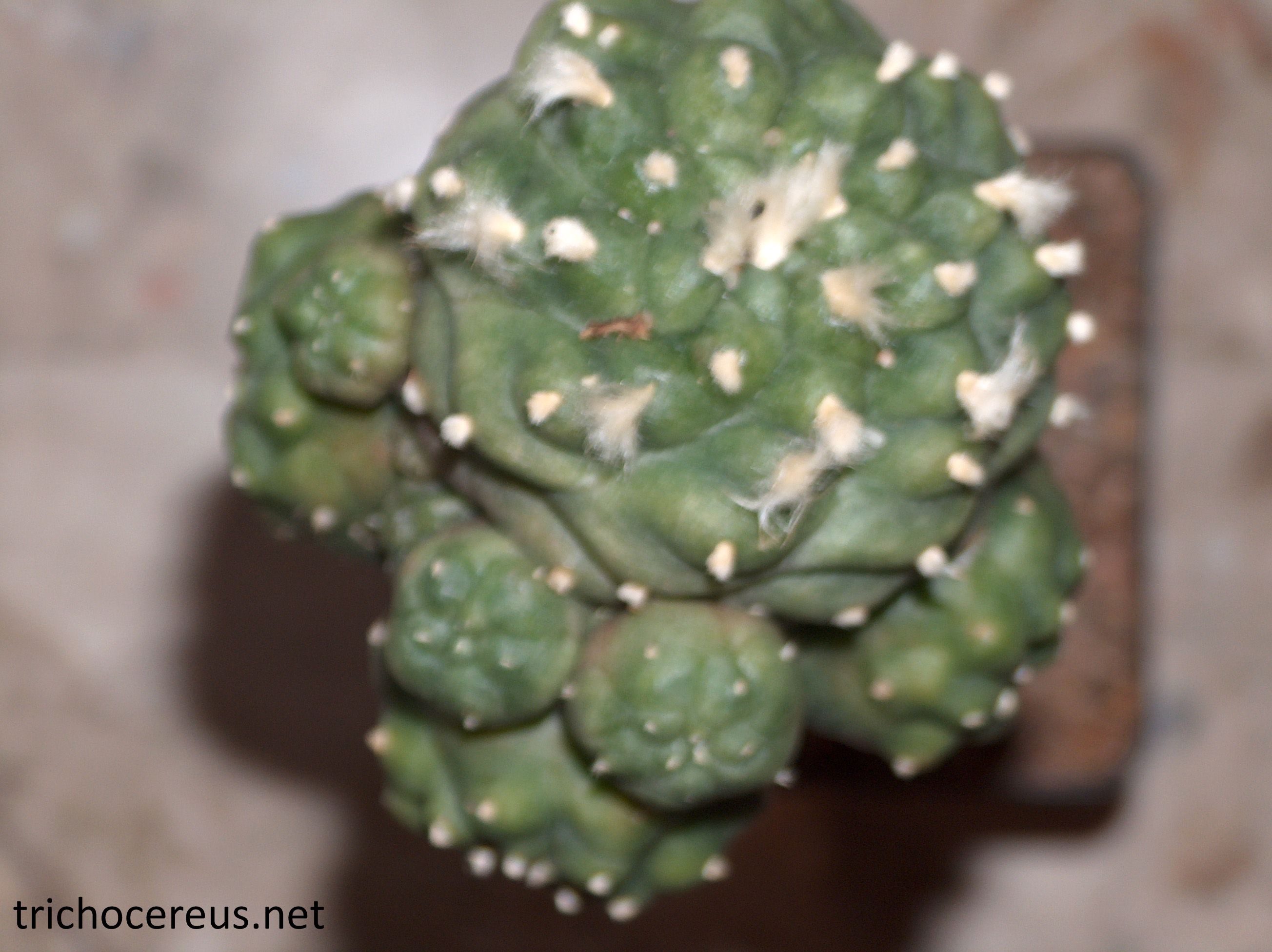 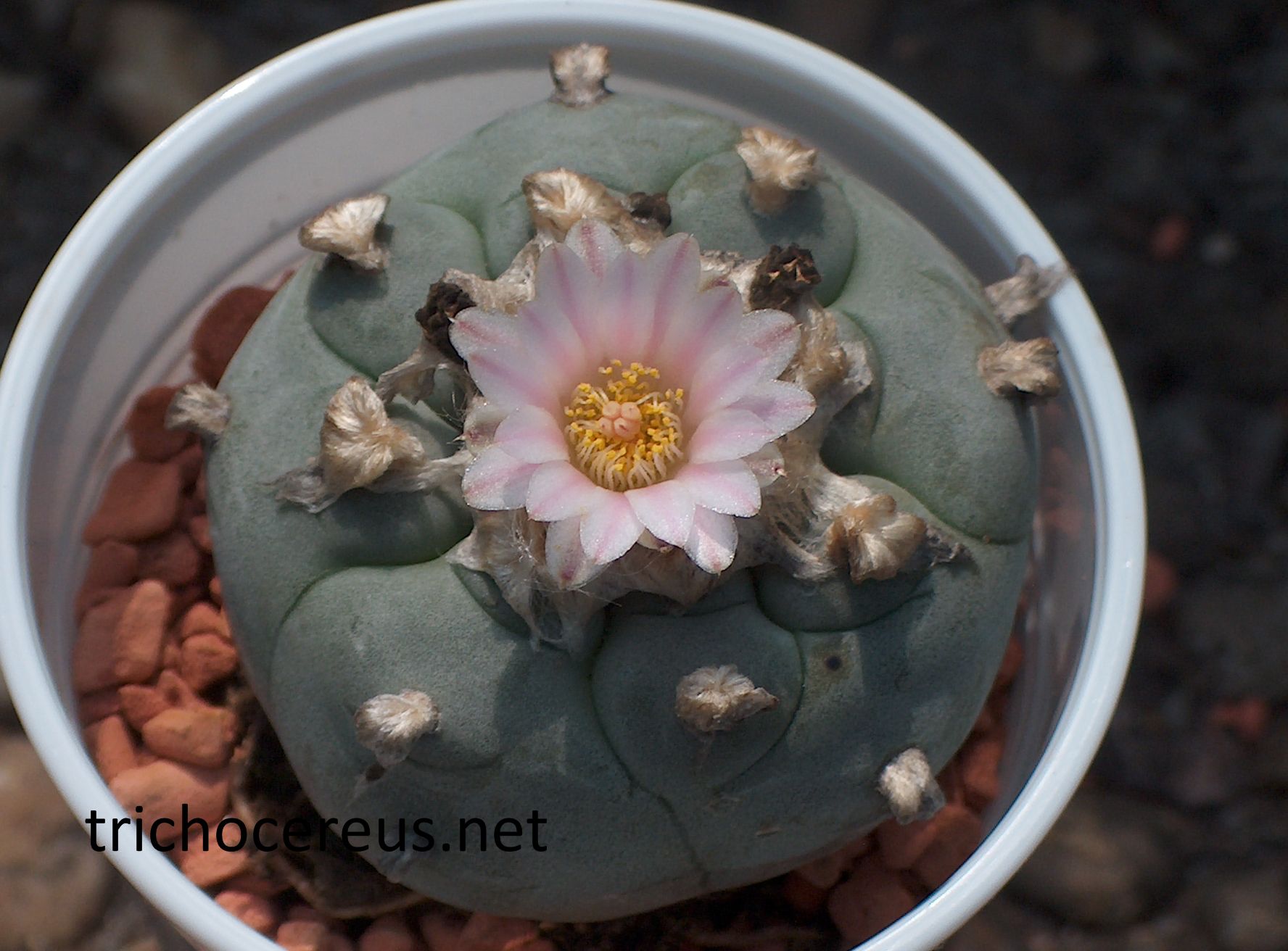 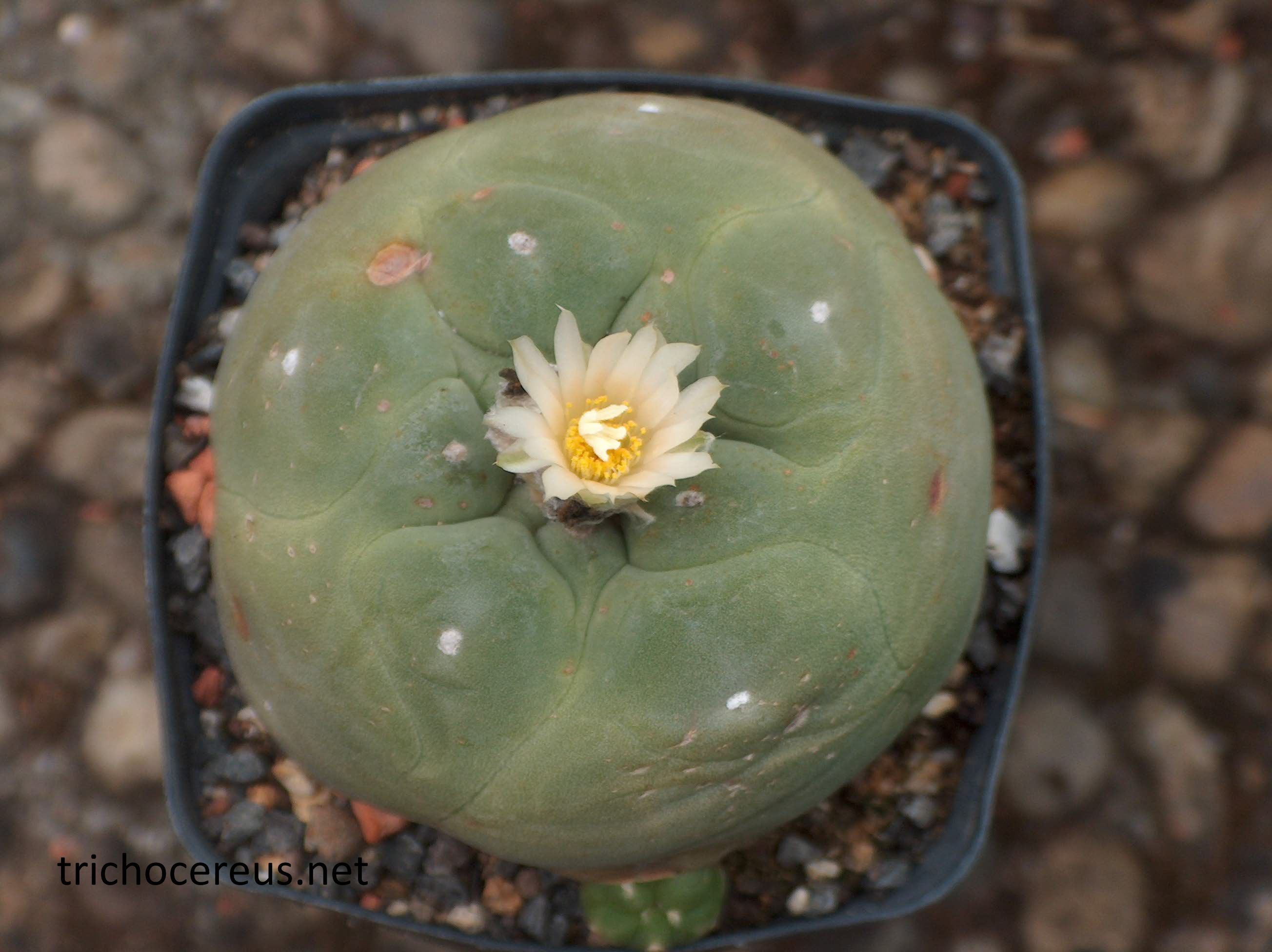 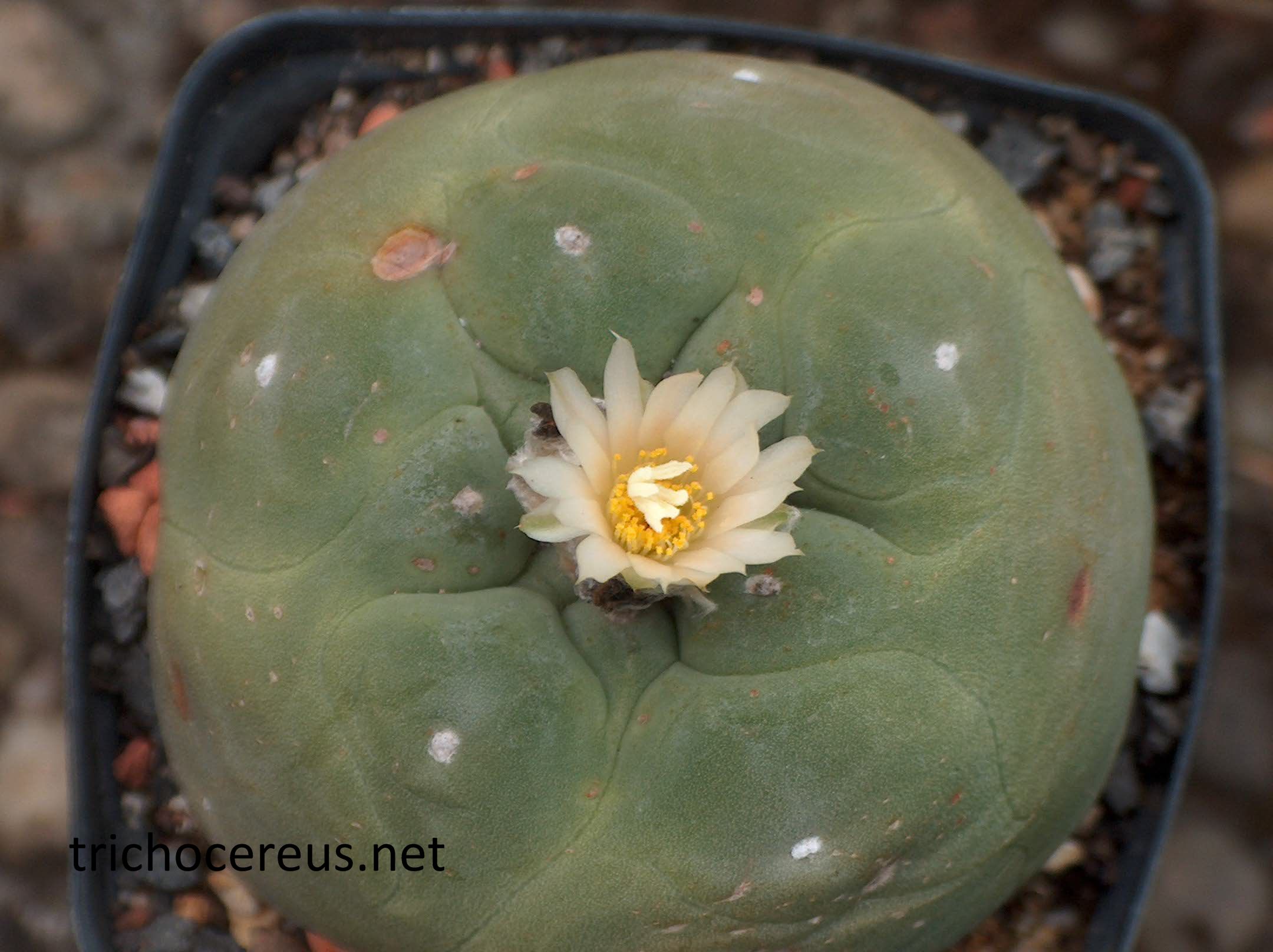